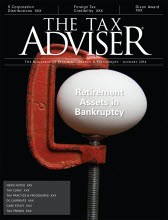 The IRS recently provided guidance on the treatment under Sec. 174 of research and development (R&D) expenditures incurred in connection with the development of tangible property, including pilot models (REG-124148-05). The proposed regulations would, among other things, settle the question of whether the sale of a product resulting from otherwise qualifying research or experimental expenditures disqualifies those expenditures from Sec. 174 treatment. The IRS is proposing that if expenditures qualify as research or experimental expenditures, it will no longer matter if the resulting product is ultimately sold or is used in the taxpayer’s trade or business.

Sec. 174 allows taxpayers to either currently deduct R&D expenditures or amortize them over a period of not less than 60 months. Under the current regulations, costs relating to a product after the uncertainty relating to its development is eliminated do not qualify as deductible R&D expenditures under Sec. 174.

Under the “depreciable property rule,” adopted in 1957, expenditures for the acquisition or improvement of property that is subject to an allowance for depreciation or depletion are not deductible under Sec. 174; however, depreciation deductions can qualify as Sec. 174 expenditures to the extent the depreciated property is used in connection with research and experimentation.

In the past, the IRS has argued that Sec. 174(c) precludes Sec. 174 treatment when the resulting product is subsequently sold to a customer, because the sale makes the product depreciable property in the customer’s hands. The IRS is now proposing that the ultimate success, failure, sale, or other use of the research or property resulting from research or experimentation will not be relevant to determining eligibility under Sec. 174.

PILOT MODELS AND COSTS OF PRODUCING A PRODUCT

The proposed regulations define “pilot model” as any representation or model of a product that is produced to evaluate and resolve uncertainty during the development or improvement of the product.

The proposed regulations also clarify the general rule that the costs of producing a product after the elimination of uncertainty regarding its development or improvement are not eligible expenses under Sec. 174.

Finally, the IRS is proposing a “shrinking-back” rule to address situations in which a component part of a larger product meets the requirements of Regs. Sec. 1.174-2(a)(1) (defining “research or experimental expenditures”) but the overall product itself does not. This rule will preserve Sec. 174 eligibility for component parts where the overall product does not meet the requirements of Sec. 174.

The regulations are proposed to be effective for any tax year ending on or after the date they are finalized; however, taxpayers may rely on the proposed regulations until then.

For a detailed discussion of the issues in this area, see “Proposed Regs. Clarify Research Expenditure Eligibility Under Sec. 174,” by David S. Hudson, J.D., LL.M., in the January 2014 issue of The Tax Adviser.