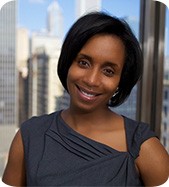 My father (Tyronza R. Richmond) always encouraged me to major in accounting. He was business school dean at North Carolina Central University in Durham, N.C., for 10 years and chancellor from 1986 until 1992. I took my first accounting course as a ninth-grader at Charles E. Jordan High School in Durham. That’s when I was first exposed to accounting, and I pursued it as a major in college.

My first job as a professor was at the University of North Carolina–Greensboro. During my ethics and international accounting course, a student did a project on forensic accounting, and I thought it was a fascinating area. When I looked more into the field, I realized it was a really neat combination of accounting, law, criminology, psychology, auditing, and financial accounting. I thought it was the perfect blend of everything. Forensic accounting showed how accounting information can be used for good and for bad, and it is vastly different from auditing. I went to a three-month summer certificate course in forensic accounting that was sponsored by New York University’s continuing education program. After that summer, I went back to UNCG for one more year. I then decided that I wanted to get some practical experience, so I went to work for KPMG for about a year and a half, and then went to DePaul.

I wanted a delivery platform that would be larger than just a journal article or just a textbook. I thought that film and teaching were really powerful tools to reach a larger audience—more students, more practitioners, just more people—by putting my thoughts in a film as opposed to putting them on a piece of paper. So this is why I started Helios Digital Learning.

My first film was Crossing the Line: Ordinary People Committing Extraordinary Crimes. Our first screening was in 2012. It is a 65-minute film that chronicles the lives of five white-collar felons in four modules. It really takes you into the life of a person’s crime—how they thought about it. It’s like a first-person version of CNBC’s American Greed. With Crossing the Line, the person who did the crime is talking directly to you. I believe that hearing from the person directly has a much more significant impact than just talking about somebody.

The second film I did, All the Queen’s Horses, is about the Dixon, Ill., $54 million fraud and Rita Crundwell. (Crundwell, the town’s comptroller and treasurer, embezzled the money over more than 20 years and used much of it to build a quarter-horse-breeding empire. See “The $54 Million Fraud,” Forensic & Valuation Services Insider, July 31, 2013.) The first part of the film talks about Rita and her fraud scheme, but really it’s a look at governmental fraud and what can we do to stop public corruption.

I was selected to participate in Tribeca Hacks, sponsored by the Tribeca Film Institute, because the Dixon fraud case can be explained by using alternative media platforms in addition to traditional documentary film. I was paired with a technologist to explore how we can make data work in storytelling in films.

The third film, which will come out later this year, is A Day in the Life of Whistleblowers. The film will be a modern-day version of The Insider.

I think that words and video are powerful. If you want people to feel and to empathize, you can do that in film in a way you just can’t do with paper and pencil.

—As told to Jeff Drew, jdrew@aicpa.org ,
a JofA senior editor.