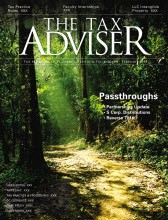 On Oct. 22, the IRS released long-awaited final regulations on owner shifts and ownership changes under Sec. 382. The rules, contained in T.D. 9638, retain a taxpayer-friendly exception for small shareholders and provide a new anti-abuse rule.

Sec. 382 limits a corporation’s use of net operating loss (NOL) carryovers and certain other attributes after the corporation has a change in ownership. The rules are designed to prevent trafficking in NOLs and other loss attributes. An ownership change is measured by the increase in percentage of stock that is owned by one or more 5% shareholders during a (usually three-year) test period. Individual shareholders who own less than 5% of the corporation are aggregated and treated as a single 5% shareholder (called a public group).

For a detailed discussion of the issues in this area, see “Sec. 382 Final Regulations for Small Shareholders,” by Greg Alan Fairbanks, J.D., in the February 2014 issue of The Tax Adviser.

Also look for articles on the following topics in the February 2014 issue of The Tax Adviser: