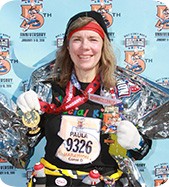 I grew up in a small town: Fayetteville, Tenn. What you grow up with, you assume is normal. Many people expected young women to be nurses or teachers. My parents always said you can do anything you want to. I think I was encouraged more than most young women my age.

I explored some majors that I thought would be good for law school. Accounting was one of them. After the first few classes, I just fell in love with accounting. Law school fell off the radar screen pretty soon.

I got into teaching accidentally. I was working in internal audit for a bank and had just gotten married. My husband was a high school assistant principal and also taught history one night a week at a community college. He called one day and said that the college was desperate for someone to teach accounting.

The college adminstrators knew he had married an accountant. I told them I only had a CPA and a bachelor’s degree. They said a CPA was good enough. I did it to help them out, but I really enjoyed it. They asked me to finish out the other quarters and to come back the next year. I began to enjoy that job more than the bank job. I decided that I probably wanted to pursue an academic career, so I went back to get a master’s degree and later a doctoral degree.

I’ve been teaching at Middle Tennessee State for 24 years. I was on the AICPA board of examiners when the CPA exam became computerized, and now I serve on that board again. Many things have changed. I also served a three-year term on the AICPA board of directors. We all see our own pocket of accounting, so it was good to see an overview of all aspects of the profession.

I didn’t start running until my late 20s. I was the unathletic one in the family. I got started when I went back to Middle Tennessee State for my master’s. I ran 3 miles three days a week and thought that was enough for anybody.

In 2008, I made it a goal to do a half-marathon (13.1 miles) in every state. I had mainly done the Country Music Half Marathon in Nashville to that point. I loved to travel and I loved to run, and you see the country differently when you run. My goal was to do it by the time I was 60, and I turned 57 in September. I’m really thrilled that my body allowed me to finish that goal three years early. I’ve done 77 half-marathons.

Sometimes, we make our summer vacation around races. We did Alaska last year. My husband, who is not a runner, loves small towns in the West. It was important for me not to make this a job. I wanted it to be fun.

I love cold-weather running. One of my favorite races was Goofy’s Race and a Half Challenge at Disney World. It was so cold that day in Orlando. For races, they set out cups of water on tables in advance. It was so cold that the water had frozen. I absolutely loved it. I had on several layers, shedding as needed, but that’s my kind of running. My complaint is when it’s warm.

I’m not fast. You can’t do a large quantity of races and push the pace. You can choose quantity, or you can choose time. My very best is still not really fast, but I do more time-specific training now.

In September, I completed the 50-state goal with a race in Chicago. It was a seriously emotional weekend for me. I was just in awe that 14 people had come to support my race, seven running and seven waiting at the finish line. With three-tenths of a mile left, you turn the corner and see the finish line. I turned that corner and just stopped. Five of us had been together the whole time. My son asked, “What’s wrong?” I said, “I don’t know that I can cross this finish line.” He said, “You can cry and run at the same time. Let’s go.” So I did. I crossed that line with tears in my eyes for sure.

—As told to Neil Amato, namato@aicpa.org , a JofA senior editor.