Would a new tech toy boost your holiday spirits? Consider these products.

It’s December, the heart of the holiday season and an opportune time for CPAs to treat themselves to a tech gadget or two (or, even better, have someone else buy them one as a gift). The hardest part is sorting through the choices. Rapid changes in technology are creating device obsolescence at a dizzying rate. Technology purchased just a year or two ago may already be obsolete. So how should CPAs invest their precious IT dollars? Following are some of the standout gear, gadgets, and devices that deserve careful consideration. 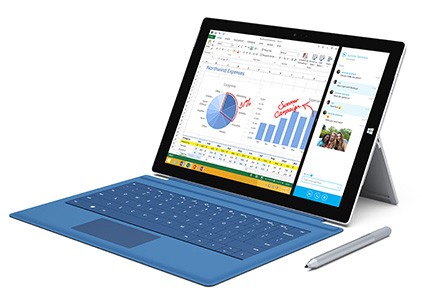 Microsoft Surface Pro 3 (microsoftstore.com) : Microsoft calls the Surface Pro 3 “the tablet that can replace your laptop.” While Microsoft critics may disagree with that statement, I have found the claim to be credible. In my travels speaking to accounting groups and working with clients, most of whom are CPAs, I have seen more Surface Pro 3s as desktop and laptop replacements than any other 2-in-1 hybrid. The Surface Pro 3 combines the best of the tablet and laptop platforms. It has a 12-inch display but weighs only 2.4 pounds with the keyboard/cover attached. More importantly, the Surface Pro 3 sports the latest Intel processors, making it capable of running new and legacy Windows software. If it’s time to upgrade your desktop experience or you’re seeking a dual-purpose device, the Microsoft Surface Pro 3 warrants a closer look.

Samsung Galaxy Tab S (samsung.com) : Samsung is one of the most innovative and prolific manufacturers of devices running Google’s Android operating system. The extensive Samsung Galaxy lineup includes numerous smartphones and tablets, with the newly released Galaxy Tab S tablet positioned as the company’s most fully evolved blend of form, function, utility, and price to date. The Galaxy Tab S comes in two sizes—8.4 inches and 10.5 inches—and two colors, black or white. The Galaxy Tab S stands out in the tablet market for several reasons:

If you’re interested in a tablet, there are many good choices on the market, but I’d make sure to at least look at the Galaxy Tab S.

Apple iPhone 6/iPhone 6 Plus (apple.com) : Apple made waves this fall with the release of the iPhone 6, iPhone 6 Plus, and the iOS 8 operating system (as well as the Apple Watch, which is mentioned in the next item). Amid great fanfare, Apple released thinner phones with larger screens—4.7 inches for the iPhone 6, and 5.5 inches for the iPhone 6 Plus—longer battery life, greatly improved camera technology, and Wi-Fi speeds up to three times faster than previous iPhones. Under the hood, both units sport the new 64-bit A8 processor running on iOS8. Bending issues with the new iPhones and bugs with the new iOS made this Apple launch bumpier than most. But amid the hype and hiccups, the most compelling and important feature in the iPhone 6 lineup may well be Apple Pay—the electronic payment ecosystem Apple debuted in October using near-field communication (NFC) technology built into both devices. Depending on adoption by retailers and iPhone 6/iPhone 6 Plus owners, Apple Pay may soon become the preferred way to make payments, forcing physical credit cards to go the way of the typewriter and 8-track tapes. 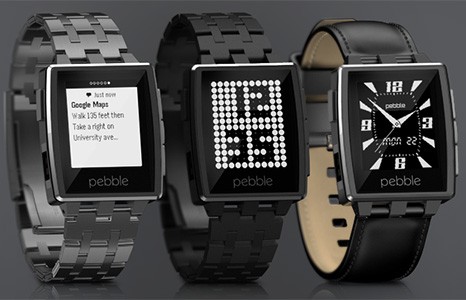 Pebble Steel (getpebble.com) : One of the hottest trends in technology today is wearable devices, with hundreds of vendors working to create the perfect device. One of those vendors, Pebble, released its first smartwatch in 2013, thanks in large part to what was the most successful Kickstarter campaign to that point. Early users raved about the Pebble watch’s functionality but complained that the plastic casing and rubberized band weren’t very stylish. So in 2014, Pebble released Pebble Steel, a successor to the original Pebble. The Pebble Steel has a thinner body, metal buttons, and an upgraded Corning Gorilla Glass screen. It’s available in two configurations: a black matte finish or a brushed stainless steel finish—both with a black leather band and matching steel band. Like the original Pebble, Pebble Steel is capable of displaying incoming notifications regarding emails, calls, text messages, social media updates, stock prices, activity tracking, and more from the smartphone it’s paired with. In addition, with an app store that now includes more than 1,000 applications, Pebble watches can be customized to each user’s preferences. Because Pebble can pair with any iOS or Android smartphone, chances are good it’s compatible with the phone in your pocket or purse. Someday soon, Android Wear-based smartwatches or the new Apple Watch might knock Pebble from its perch—but for now, Pebble delivers the ideal amount of technology to a user’s wrist. 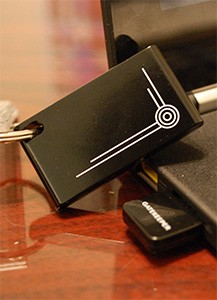 GateKeeper Chain (gkchain.com) : Tired of having to enter your password every time you sit down in front of your computer, but want to make sure your computer is secure each time you walk away? If so, the GateKeeper Chain key fob may be what you need. The GateKeeper Chain is a small device that fits in your pocket and pairs to a laptop or desktop computer via a Bluetooth 4.0 connection. GateKeeper employs proximity technology to unlock the host computer whenever the key fob is nearby. It also automatically locks the device when the key fob is no longer in range (which can extend to 100 feet). The Gatekeeper Chain is an inexpensive and hassle-free way to ensure you can sit down and get to work without delay but securely lock your machine—with no user interaction—whenever you need to step away. 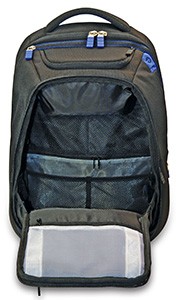 TYLT Energi+ Backpack (tylt.com/energi-backpack) : The TYLT Energi+ Backpack is described as a next-generation, multifunctional briefcase, backpack, and mobile charging station that allows users to recharge their devices while on the move. TYLT designed the backpack so users can route charging cables from the 10,400 milliampere-hour (mAh) rechargeable lithium ion battery (capable of multiple recharges for most smart devices) in the main compartment to any one of the seven internal pockets, enabling users to connect and recharge three devices at a time. The TYLT Energi+ Backpack wasn’t the first “powered” backpack on the market, but it’s most definitely one of the best available today based on its innovative design and superb functionality.

In addition to the products highlighted above, a few exciting products are scheduled to arrive shortly:

FINsix Dart (finsix.com/dart) : Tired of carrying a brick-size adapter to power your new laptop or Ultrabook? If so, the Dart 65W power adapter by FINsix could be the ideal solution. The FINsix Dart is just now coming to market, but it has already received numerous awards and accolades trumpeting it as “the world’s smallest laptop adapter.” The FINsix Dart is four times smaller and six times lighter than most traditional laptop power adapters. The Dart has a brushed aluminum finish and comes in five colors. The Dart adapter also includes a USB port that allows a user to charge his or her laptop and a USB device at the same time. So if you’re ready to lighten your load, check out the FINsix Dart adapter.

Airtame (airtame.com) : Want to be able to stream content from virtually any device to an HDMI-based monitor? The Airtame team is finalizing the design and release of an inexpensive dongle (small wireless adapter) that will allow users to collaborate and share their screen with one click. Supported device platforms include Microsoft Windows, Apple Mac OS, Linux, Google Android, Apple iOS, and Microsoft Windows Phone OS. Outfitting the large display on the wall with the Airtame dongle will enable users to project their content from most any device. Very logical.

Butterfleye (preorder.getbutterfleye.com) : A number of wireless surveillance camera systems are available today, but Butterfleye with ActiveEye technology could soon become the industry darling. In short, Butterfleye senses whom to record and when to record using ActiveEye intelligence. ActiveEye uses sophisticated motion detection technology and thermal sensors that can tell a human from other types of moving objects in the room where it’s placed. Butterfleye can also sense rapid temperature changes and fire. When any of these events are detected, users are notified via their smartphone, where they can then view a video feed in real time or view previously recorded content. The Butterfleye camera also has two-way audio capabilities, enabling the user to record events as they occur and communicate through the built-in speaker. Finally, Butterfleye also uses iBeacon and Wi-Fi to know when a user is nearby—giving users privacy when they are nearby, but staying alert when they are away. Butterfleye is nearing production, with general availability set for early 2015.

David Cieslak (dcieslak@arxistechnology.com) is a principal with Arxis Technology in Simi Valley, Calif.

The Information Management and Technology Assurance (IMTA) division serves members of the IMTA Membership Section, CPAs who hold the Certified Information Technology Professional (CITP) credential, other AICPA members, and accounting professionals who want to maximize information technology to provide information management and/or technology assurance services to meet their clients’ or organization’s operational, compliance, and assurance needs. To learn about the IMTA division, visit aicpa.org/IMTA. Information about the CITP credential is available at aicpa.org/CITP.