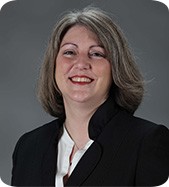 It was on a Tuesday afternoon last fall, one of those moments you’ll never forget. My boss at the time, who recruited me to be the CFO, said, “I’m going to resign, and I’ve recommended to the board that you be named interim CEO.” I had less than 24 hours to think about it from the time he told me that until I had to meet with the board. That’s not a lot of time to consider a life-altering, career-altering change.

I felt a duty to serve in that interim capacity. I said to the board, “Let’s go into this with the idea that it’s going to be a six-month arrangement, and give me two or three months, and I will tell you if I’m interested, and you can tell me if you like what you see, and then we can have a decision and start the recruiting process.” That’s how it played out. After the shock wore off and I started to really look at how my interests and skills would be able to help the organization and the challenges that I thought would lie ahead in this role, I decided it was something I was ready to do.

The community doesn’t always understand Goodwill’s mission. Lots of people think, “I drop this bag off, and the person who’s helping me get stuff out of my trunk is the mission that I’m supporting, that person’s job.” While we’re very proud to be an employer of 700 people in Kansas City, that’s not what makes us special. We can do a better job explaining that, so we’re not just another thrift store. Retail is the engine. It has to turn a margin to support the mission side, the human services side. We have programs that help people with barriers to employment, from a lack of transportation, or people with mental and physical disabilities who are struggling to find employers willing to bring them in.

After I became CEO, the number of external requests I received multiplied exponentially. The public engagement part of it, while I knew it was going to be there, the diversity and rapid growth of it has been surprising. I’ve been meeting with executives from other nonprofits, been asked to attend breakfasts and lunches to get to know folks, and I’m happy to do it. The more people know our mission, the better. We have a lot of opportunities to bring clarity to the community’s understanding of what Goodwill does. I take every one of those that I can possibly get on the calendar.

The concept of “letting go” is a challenge and a progression that every successful manager has to go through. The further you get in your career, the more critical it is that you learn that, or it’s going to hold you back. If I had not already been trying to be aware of it and let it go, then it would have been almost impossible to do it under these circumstances. It was possible because I had a team I knew I could rely on. I told them, “Here are the big pieces. If you get panicked, or you don’t think you understand it, come back to me. Otherwise, bring me the finished product, and we can talk about it then.”

To become a CEO, you have to be fascinated by the operation itself. If you don’t get excited by the operational stuff, you need to reevaluate your goals. You need to not be frightened by the mess that goes along with operations. There’s a certain lack of control. Hopefully, you’re driven by questions such as “How does this get from here to there? How much time does this take?” The questions that come to you naturally need to not focus only on dollars and cents. They need to be focused on widgets and people.