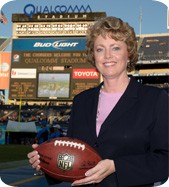 Growing up, I wasn’t really into football. It was more baseball and basketball. I was a huge Dodgers and Lakers fan. I was probably the only 10-year-old girl who had giant posters of Wilt Chamberlain and Jerry West in her bedroom.

My father started his own business. At the family dinner table, we didn’t have the TV on, and our discussions always included business. I felt I would go into some sort of business, but I didn’t know a specific field.

Toward the end of my sophomore year at the University of San Diego, I was talking to an adviser about selecting a major. I had good grades, and she said, “If you’re interested in accounting, there are scholarships I can help you get.” I said, “Great, let’s do it.” I was paying my own way through college. Looking back, I guess accounting was kind of natural. I had enjoyed an accounting class I took in high school, and I was always good in math.

After college, I went into public accounting. I worked at Price Waterhouse, and the San Diego Chargers were my audit client for the eight years I was there. When the CFO position became available, I jumped at it. It’s the best business decision I’ve made in my life. I cannot think of a better job for me. I’ve been the CFO for 22 years.

I didn’t know a whole lot about football when I started, but now I love it. I’ve worked with a lot of great people who have let me ask a thousand questions so that I could learn the game. I’m most appreciative of that because I really love the game. Monday morning after a loss is not a good time to call me. All my friends know that.

I’ve worked with three generations of the Spanos family [the team owners], which has been great. The father, Alex Spanos, hired me. His son Dean took over, and Dean’s two sons are now very active in running the club.

I’m a firm believer that if you make gender an issue, it will be an issue. I try to work with a man just like I do with another woman. I know there are other women who are CFOs in the NFL, but I guess I never really focused on it and never considered myself a trailblazer. I’ve been really fortunate to work with people who have accepted me and my personality and my talents. They have accepted me for me, and that’s been great. It’s allowed me to grow as a person and to grow as a professional.

Because of my background in auditing, I initially focused on the general ledger and the audited financial statements. Now we have a controller who does an excellent job on day-to-day operations. I am less in the details now, and it allows me to work on projects. Dean Spanos is good at soliciting opinions. He’ll ask, “What do you think?” It’s nice to get away from the nuts and bolts and get more of the strategic picture.

A tremendous amount of planning goes into the game-day atmosphere. As technology has evolved, we are now competing for people’s attention and time. Watching the game at home, on a 50- or 80-inch flat screen, is significantly different than even five to 10 years ago. We have to enhance the game-day experience. We keep fans up to date on other NFL games, and we think about people’s experience from the moment they leave their house until they return home, which includes parking and buying concessions. All those things, and how entertaining the team is on the field, impact whether you want to buy a ticket and come back.

Without a doubt, my greatest team memory is from January 1995. That’s when Dennis Gibson knocked down the fourth-down pass in Pittsburgh that sent the Chargers to the Super Bowl. It was a great experience, even though I was not at the game, to be at our stadium later that night and see the fans waiting for the team. You still hear players today talk about coming back on buses to the stadium and about how the fans greeted them.