Q: I am in the process of updating a Word 2003 document containing videos that were inserted as embedded objects. Previously, these videos appeared in a video window and when double-clicked played in place within Word 2003. However, in subsequent editions of Word, these embedded videos appear as a file icon and, when the icons are double-clicked, Word launches the Windows video player and plays those videos separately from my Word document. I like the old way better; is there a way to make embedded videos play from within the later editions of Word as they did in Word 2003?

A: I like the Word 2003 method better, too, but when Microsoft redesigned Office 2007, it integrated the Windows video player because this method provides more video controls. The good news is that in Word 2013, Microsoft has brought back this older functionality to a large degree by allowing videos to play in a floating player atop the Word 2013 document.

To use this functionality, insert a video into your Word 2013 document from the Insert tab by selecting Online Video from the Media group, and then search for your online video as pictured below. (To find the YouTube option pictured in the example below, you may first need to click the YouTube icon located in the bottom of the dialog box.)

Once they are inserted into Word 2013, online videos appear as pictured below, similar to the appearance portrayed in Word 2003. 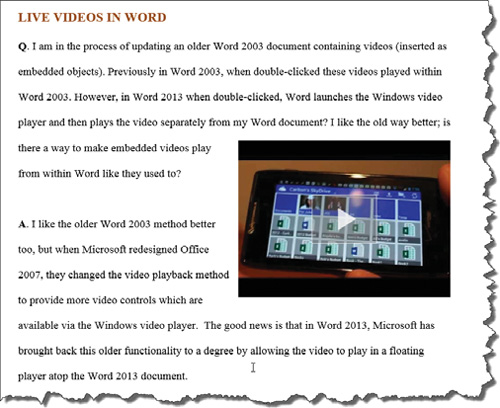 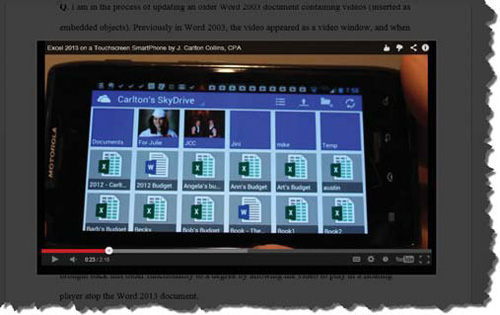