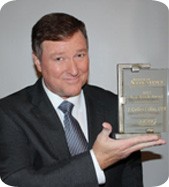 Collins is an author, lecturer, and technology consultant. He has published dozens of books and articles, delivered several thousand lectures, and assisted hundreds of companies with their accounting-system selection and implementation. He also writes the JofA’s popular monthly Technology Q&A column.

The award is named for John L. Lawler, a former JofA editor and AICPA senior vice president. Winners are chosen annually by the JofA’s board of editorial advisers.

Submit your own article to the JofA. To learn more about opportunities to be published by the JofA, read the submission guidelines or contact Amelia Rasmus at arasmus@aicpa.org.