In the latest review, released in December, TIGTA analyzed statistical samples of returns of 507 individuals claiming large amounts of noncash charitable contribution deductions. In 303 of them, or nearly 60%, taxpayers did not comply with the reporting requirements. These noncompliant returns represented more than $200 million in unsubstantiated claimed contributions. Issues contributing to noncompliance included a lack of proper attached forms; incorrectly completed Forms 8283, Noncash Charitable Contributions, or those with incorrectly reported items; and unclear descriptions of donated property. 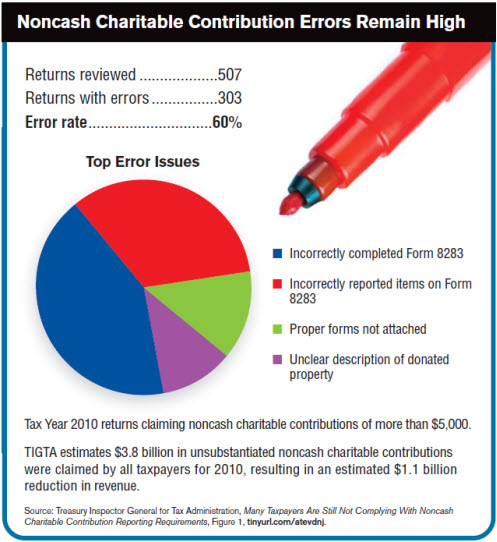 In its March 2007 audit report on the issue, the IRS agreed to TIGTA’s recommendation that it flag for examination returns claiming noncash charitable contributions of more than $500 that lacked a Form 8283. However, in the 2012 report, TIGTA found that 18% of the errors it found in returns claiming noncash charitable contributions of more than $5,000 involved missing documents, and none of those returns had been examined by the IRS. TIGTA recommended, and the IRS agreed, that the IRS should expand its processes to identify all returns claiming noncash charitable contributions of more than $500 that lack an attached Form 8283 (as required by Sec. 170(f)(11)(B) and Prop. Regs. Sec. 1.170A-16(c)) and those of more than $500,000 lacking an attached qualified appraisal (as required by Sec. 170(f)(11)(D) and Prop. Regs. Sec. 1.170A-16(e)). The IRS also agreed to revise Form 8283 and its instructions to require taxpayers to include the contribution date in addition to the donee acknowledgment of receipt for donations of noncash property of more than $5,000; to clarify that for purposes of the reporting threshold, taxpayers must group similar items and aggregate their value; and to require taxpayers claiming contributions of securities to include the number of shares donated.

The TIGTA report also found problems with claimed donations of motor vehicles. In about 42% of tax returns with a Form 1098-C, Contributions of Motor Vehicles, Boats, and Airplanes, the IRS did not have on file a copy of the form from the donee, or the value of the donation claimed did not match the IRS’s records. TIGTA recommended matching copies of Form 1098-C submitted with taxpayers’ returns with its records and that the IRS develop a process to identify donees that fail to file the form. The IRS disagreed with the former recommendation, noting that the copy of Form 1098-C is a supporting document only and said it will monitor the effectiveness of its outreach program to advise donee organizations of the filing requirement.