The AICPA Auditing Standards Board (ASB) made a correction to an auditing section in the AICPA Professional Standards to reinforce the board’s intentions not to change practice and to avoid unintended consequences.

The auditing (AU) sections were redrafted as part of the clarity project to reflect the ASB’s established clarity drafting conventions, and are designed to make the clarified standards easier to read, understand, and apply.

When this redrafting occurred, the ASB did not intend to change or expand AU Section 634 in any significant respect.

The ASB believed that the substance of the last sentence in paragraph .42 of AU Section 634, “In the case of a business combination, the historical financial statements of each constituent part of the combined entity on which the pro forma financial information is based should be audited or reviewed,” had been appropriately captured in paragraph .53 of AU-C Section 920.

But to reinforce the ASB’s intention, the board added the sentence in paragraph .53 of AU-C Section 920. The following text illustrates the changes ( boldface italics denotes new language; deleted text is shown in strikethrough):

The Federal Reserve issued guidance to encourage U.S. banks with more than $10 billion in total assets to have their internal audit functions report to the CEO—a move that could influence similar changes in other industries, observers of the profession say.

In a policy statement, available at tinyurl.com/co3tdnv, the Federal Reserve said the objectivity of the internal audit function is served best when the chief audit executive (CAE) reports administratively to the CEO. While that relationship is encouraged by the Federal Reserve, it is not required. But if the CAE reports administratively to another executive, the statement requires the audit committee to document its rationale for the reporting structure.

The Fed created the guidance in response to the recent financial crisis in hopes of promoting objectivity in the internal audit function.

Although CAEs in the United States usually report functionally to the audit committee, they often report administratively to an executive in the C-suite. Traditionally, that executive has been the CFO, according to Institute of Internal Auditors (IIA) President and CEO Richard Chambers.

Chambers said there are risks involved with having internal audit report to the CFO.

“A lot of internal audit’s work is done looking at financial risks, financial controls, and so forth,” Chambers said. “Even if you have an objective chief audit executive, how does that look to third parties that, in essence, that individual is leading audit work of their boss’s area of responsibility?” 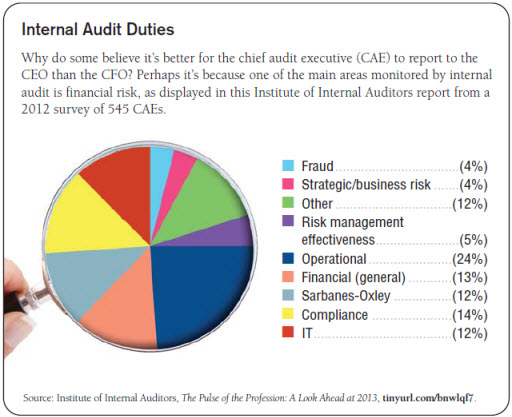