A: Presented below are three Excel-based solutions to converting numbers with trailing minus signs to negative values.

(Both formulas described above accomplish the same result using different formula approaches; the first approach is a little less complicated.)

a. Select a range of data containing numbers with trailing negative signs (note that it is OK if some of the selected data does not contain trailing minus signs);

b. From the Excel Ribbon select Data, Text to Columns;

c. In the resulting Convert Text to Columns Wizard - Step 1 of 3 dialog box, click the Next button twice, then click the Advanced button;

d. Make sure the box labeled Trailing minus for negative numbers is checked; 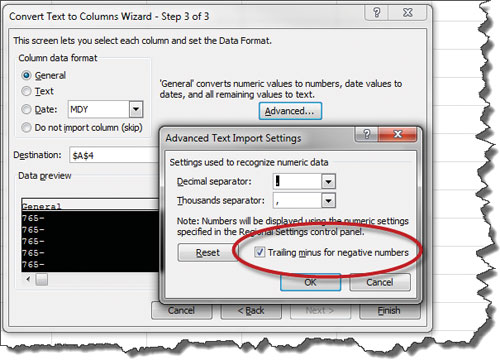 f. This operation replaces all trailing negative signs in your data selection range with leading minus signs.