Q: Embarrassingly, I purchased a new computer last year that was advertised as being pre-installed with the 64-bit version of Windows 7 Professional operating system, and I then spent about three weeks (off and on) installing applications, configuring the system, setting up email, setting up network permissions, setting up printers, and copying my data over. Once the new computer was ready for use, I switched computers, and, a few weeks later, I de-commissioned my old 64-bit Vista computer.

I soon noticed that my new computer needed regular rebooting, and upon closer inspection I discovered that my new computer had actually been configured with the 32-bit version of Windows 7 Professional (not the 64-bit version as advertised)—and I failed to notice this problem before investing time to install my applications and data, and configure the system. As a result, the computer uses only three of the system’s eight gigabytes of RAM—so the performance is worse than that of my old Vista computer. My understanding is that there is no way to upgrade my 32-bit system to 64-bit without starting over and reinstalling everything all over again. Is this true?

The store manager where I purchased the computer apologized and offered to provide a free consultant to help me reinstall the computer, but a year later I still have not found sufficient time to shut my computer system down for several days in order to reinstall and reconfigure everything. In hindsight, I should have checked the system to make sure the 64-bit version of the operating system had been correctly installed before proceeding with the remaining setup, but it never occurred to me to do so.

A: Unfortunately, there is little you can do to recover from this type of error—short of wiping the hard drive clean and reinstalling a new operating system, applications, and system settings from scratch. If it is any consolation, perhaps sharing your misfortune may alert our readers to avoid this potential problem the next time they purchase a new computer.

To ensure that the operating system has been correctly installed on your computer, from the Windows XP, Windows Vista, Windows 7, or Windows 8 Control Panel, select System and check to see that the Installed memory (RAM) and System type screen confirms that the 64-bit version of your operating system has been installed and that other settings match your system’s advertised capabilities. 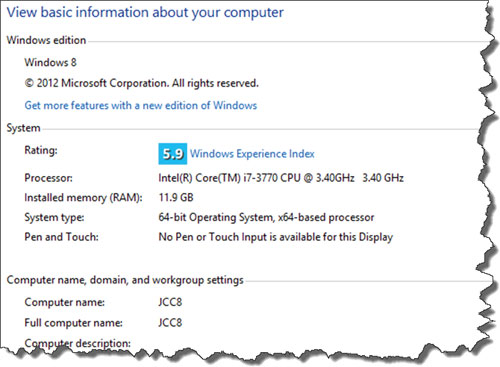 To view your computer’s System Profiler screen on an Apple computer (running Mac OS X Snow Leopard), from the Apple menu, click About This Mac and then click the More Info button.