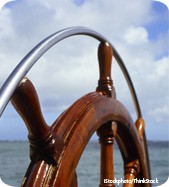 Ethical decisions often need to be reached quickly, but the AICPA’s Code of Professional Conduct (ethics code) is not structured for quick and easy navigation. A proposed reformatted ethics code is meant to change that. AICPA members are invited to comment on the proposal until Aug. 15.

The current ethics code started as eight rules that fit on one sheet of paper and was adopted April 9, 1917, by the American Institute of Accountants, predecessor of the AICPA. Over time, the rules evolved, and in 1973 they were codified into the current Code of Professional Conduct. Almost 100 years—and many sheets of paper—later, the ethics code and related guidance are ripe for reorganization.

The reformatted ethics code is intuitively organized. It is restructured into several parts, each organized by topic and, where necessary, subtopic and section.

Often CPAs categorize themselves by what line of business they are in. That is, are the CPAs in public practice, in business, or perhaps even between jobs or retired? Therefore, it seemed intuitive to structure the reformatted ethics code by line of business, so that CPAs only need to look at the part applicable to them. Accordingly, Part 1 contains the rules of conduct and interpretations that are applicable to members in public practice. Part 2 does the same but for members in business. Part 3 applies to all other members, such as those who are retired or between jobs (see Exhibit 1).

Each part is then further organized by topic, and, where necessary, a topic may be further broken down by subtopic, and subtopics by section (see Exhibit 2). In addition, all ethics rulings have been redrafted as interpretations and codified under the appropriate topic. All nonauthoritative guidance issued by the Professional Ethics Division that is applicable to the topic appears in boxed text at the end of the applicable standard (see Exhibit 3). That should allow users to identify at a glance authoritative and nonauthoritative guidance that is applicable (or for that matter, not applicable) to their issue. 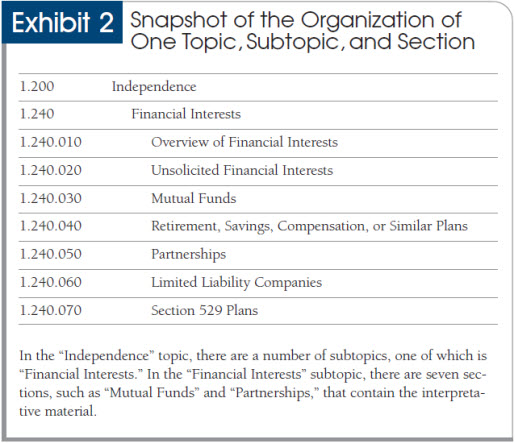 While the intent was to maintain the substance of the existing ethics standards during the reformatting process, a number of improvements were made to clarify the guidance and, as such, enhance the user experience. For the most part the substantive changes were made either to elevate nonauthoritative guidance into authoritative standards or to broaden existing guidance.  (For a detailed discussion on all of the substantive changes, see the explanation that accompanies the exposure draft, available at tinyurl.com/cmlk8ws.)

The most significant change is the incorporation of two conceptual frameworks, one for members in public practice and one for members in business. While the existing code does contain a Conceptual Framework for AICPA Independence Standards (available at tinyurl.com/cuayxr6) that will be retained in the reformatted ethics code, the only guidance available to members when making decisions unrelated to independence regarding relationships or circumstances that are not explicitly addressed in the existing code is a nonauthoritative framework. This document, the Guide for Complying With Rules 102–505 (available at tinyurl.com/34wyyzn), describes a threats and safeguards approach that members can use to evaluate those relationships or circumstances. Since it is impossible for the ethics code to cover every possible relationship or circumstance a member may need to address, incorporation of the two conceptual frameworks that outline a threats and safeguards approach is an invaluable tool.

WHAT IS A THREATS AND SAFEGUARDS APPROACH?

The process begins by identifying threats. When a threat is identified, it must be evaluated to determine if it is at an acceptable level. The threat is at an acceptable level if “a reasonable and informed third party who is aware of the relevant information would be expected to conclude that the member’s compliance with the rules is not compromised" by the relationship or circumstance. If the member concludes that the threat is not at an acceptable level, he or she should apply safeguards to either eliminate the threat or reduce it to an acceptable level. If the member is unable to implement effective safeguards, then he or she should decline or discontinue the professional services or resign from the engagement or from the employing organization (see Exhibit 4). This approach is generally the same as that used in the Conceptual Framework for Independence, except that the examples of threats and safeguards identified in the new frameworks have been tailored to apply to rules other than independence. 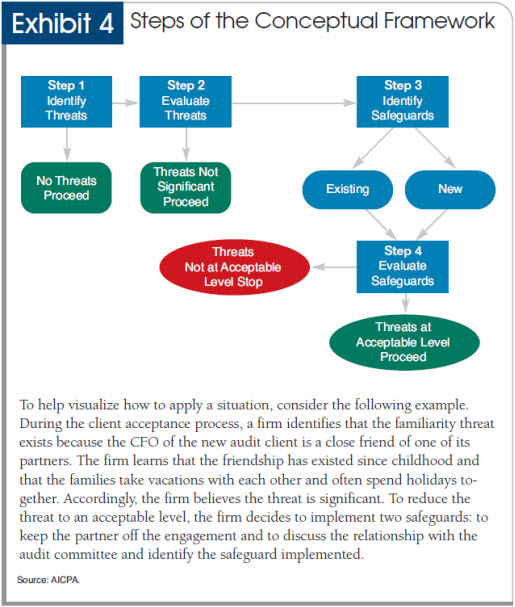 In addition to incorporating the conceptual frameworks, the reformatted ethics code also recasts certain provisions (mainly independence provisions). The changes reflect the conceptual framework approach to enhance the reader’s understanding of the provision by providing further context into things such as what threats are present and what safeguards are effective. Recasting, however, does not change the substance of the existing provisions by allowing the application of judgment where none is permitted today. For example, if a covered member holds stock in an audit client, the only safeguard that would eliminate or sufficiently mitigate the “financial self-interest” threat to independence would be to eliminate the interest or cease being a “covered member”—the same requirement as under today’s rule. Thus, recasting will not weaken the rule or allow for judgment where none is permitted today.

Another substantive change included broadening certain existing guidance. Specifically, the ethics rulings that appear in the current ethics code provide guidance in a question-and-answer format on very specific fact patterns. When recasting this guidance (and some interpretations as well) and aligning it with the appropriate topic, subtopic, or section, on some occasions the guidance was broadened. For example, guidance on the use of the Personal Financial Specialist (PFS) designation was broadened to apply to any AICPA-awarded designation, while guidance on false, misleading, or deceptive acts in promoting or marketing professional services that was applicable to only members in business was drafted for members in public practice and all other members.

The reformatted ethics code was issued in an exposure draft on April 15 (available at tinyurl.com/cmlk8ws). Because of the significance of this proposal, the comment period is open for four months, until Aug. 15. The Professional Ethics Executive Committee will discuss the comments during the following five months. The final revised ethics code is expected to be adopted in January 2014 and take effect Dec. 15, 2014.  However, it is anticipated that the two broad conceptual frameworks will be granted an additional one-year delayed effective date, so  members and firms will have adequate time to revise their policies and procedures.

The AICPA’s existing Code of Professional Conduct is not structured for quick and easy navigation. A proposed reformatting is meant To change that. The changes mostly affect organization, but some are substantive.

The reformatted ethics code is organized into three parts. Part 1 applies to AICPA members in public practice, Part 2 to members in business, and Part 3 to all other members, including those who are retired or between jobs.

The exposure draft’s comment period is open until Aug. 15, and the Professional Ethics Executive Committee will discuss the comments. A revised ethics code is then expected to be adopted in January 2014 and take effect Dec. 15, 2014.

Ellen Goria ( egoria@aicpa.org ) is senior manager for independence and special projects for the AICPA.