GAO: Foreign account “quiet disclosures” may be much higher than detected

More than 10,000 taxpayers showed signs of having avoided offshore penalties by making “quiet disclosures” of foreign bank accounts for tax years 2003 through 2008, the U.S. Government Accountability Office (GAO) reported, a period for which the IRS has detected several hundred quiet disclosures. Filing data also suggest many more taxpayers may have begun reporting previously reportable foreign accounts on a recent current-year return without entering the government’s offshore voluntary disclosure program (OVDP) or making a quiet disclosure for prior open years, the GAO said. While these taxpayers may have come into voluntary compliance going forward, they also thereby may have evaded all penalties and past-due taxes and interest on the accounts and income generated by them.

In the report, Offshore Tax Evasion: IRS Has Collected Billions of Dollars, but May Be Missing Continued Evasion (GAO-13-318), released April 26, the GAO gave results of its study of the effectiveness of the IRS’s 2009 OVDP, which was the IRS’s second OVDP and the most recent one with enough closed cases for analysis. The IRS also conducted OVDPs in 2003 and 2011, and has had one ongoing since 2012. In each, taxpayers have been allowed to apply to the IRS and, if they qualify, disclose their foreign accounts and pay taxes, interest, and tax-related penalties due for open years. In exchange, the IRS waives any criminal prosecution and limits the penalty for failing to disclose the accounts (“offshore penalty”) to, in the 2009 OVDP, 20% of the highest aggregate value of the unreported accounts between 2003 and 2008 (the years covered by the 2009 OVDP). The penalty otherwise applicable to failing to properly file a Form TD F 90-22.1, Report of Foreign Bank and Financial Accounts (FBAR), is, for each year of violation, the greater of $100,000 or 50% of the balance in the account at the time of the violation.

The GAO identified 19,337 participants in the 2009 OVDP in 10,439 closed cases. The average offshore penalty assessed was about $376,000. Almost half the participants had accounts in Switzerland (a “John Doe” summons in 2008 for the names of U.S. account holders in Swiss bank UBS was a major factor driving participation in the 2009 OVDP). About half of the $4.1 billion in total revenues collected (as of the end of 2012) was from 378 cases. All the OVDP programs together have resulted in more than 39,000 disclosures and more than $5.5 billion in revenue as of December 2012.

Quiet disclosures. To identify potential quiet disclosures for years covered by the 2009 OVDP, the GAO identified taxpayers that had filed amended or late returns and FBARs for one or more of those years and excluded OVDP participants from this total. It found that 10,595 taxpayers met these criteria, indicating possible quiet disclosures. Of those, 3,386 taxpayers made the late or amended filings for multiple tax years—94 of them for all six years.

The IRS identified “several hundred” taxpayers (the report did not give a more specific number) as making quiet disclosures by similarly looking at amended returns for the period and screening out those with adjustments unrelated to offshore accounts. It also looked at amended returns with increased tax assessments over a certain threshold. The IRS also looked at FBARs filed or amended with amended returns, but only for those processed in 2009 and for the limited purpose of detecting movement of taxpayer assets from “non-secrecy” jurisdictions to those with financial secrecy laws.

New reporting. To estimate potential numbers of taxpayers newly reporting existing foreign financial accounts without making any disclosure concerning or amending prior returns, the GAO also looked at the overall increase between tax years 2003 and 2011 in FBAR filings and from fiscal 2003 to 2010 in returns that reported “yes” to the question on Schedule B, Interest and Ordinary Dividends, about whether the taxpayer owned or controlled a foreign financial account. The latter more than doubled in that period to 515,635 (see related graphic). As a percentage of all taxpayers filing Schedule B, they rose from approximately 1% in 2003 through 2007 to more than 2.5% in 2010. Similarly, the number of FBARs filed more than tripled to 618,134 from fiscal 2003 to 2011, and more than doubled between 2009 and 2010. Reasons for the increase could include taxpayers who had complied with income reporting requirements previously but only belatedly realized the need to also answer the question on Schedule B affirmatively and file an FBAR, the GAO noted.

“However,” it added, “such a sharp increase … amidst the global economic recession and the publicity surrounding IRS’s offshore programs raises the question whether some of these taxpayers may have attempted to circumvent some of the taxes, interest, and penalties that would otherwise be owed.”

The IRS agreed with the GAO’s recommendations that it use similar methods to more effectively detect and pursue quiet disclosures and previously unreported foreign financial accounts and to use offshore data to educate taxpayers about compliance. 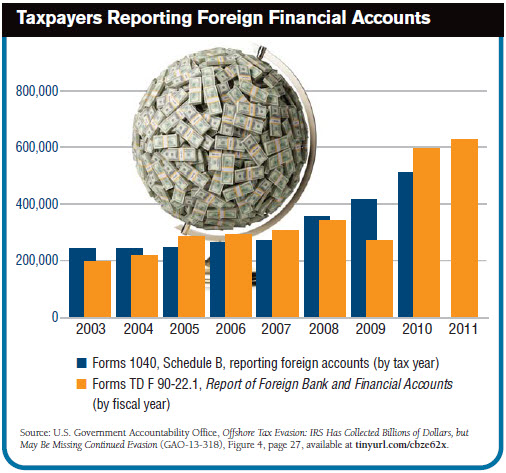