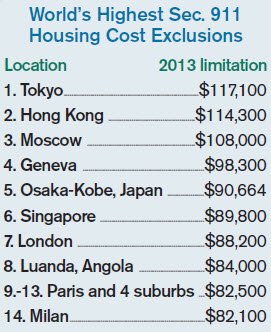 The cities are among 288 places the IRS identified in Notice 2013-31, an annual update, as having allowable foreign housing exclusions above the otherwise applicable limitation for 2013 of $29,280. The top five high-cost cities are the same as in the 2012 list (see Notice 2012-19).

Five locations in France took ninth through 13th places in 2013: Paris and its suburbs of Garches, Sèvres, Suresnes, and Versailles. All were just behind Luanda, the capital of Angola, which is undergoing an oil-related economic boom but whose per capita GDP of $6,200 remains less than one-eighth that of the United States (CIA, The World Factbook).

Notice 2013-31 is effective for tax years beginning on or after Jan. 1, 2013; however, taxpayers may elect to apply it to their 2012 tax return instead of the otherwise applicable adjusted limitation in the 2012 notice.

For calendar 2014, the inflation-adjusted limitations on deductible or excludible contributions to a health savings account (HSA) under Sec. 223 will be: