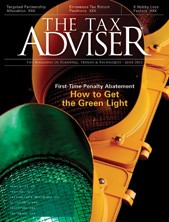 Determining proper classification of workers, either as independent contractors or employees, can be a subjective challenge for employers. The determination of whether a worker is an employee or an independent contractor is based on the facts and circumstances surrounding the individual’s work for the employer. Generally, the more the employer is able to control and direct the worker, the more likely the worker should be classified as an employee. Furthermore, employment taxes are a significant source of federal revenue, so taxpayers face heavy scrutiny.

Worker classification issues uncovered in an audit can lead to costly assessments of past employment taxes, penalties, and interest for reclassified employees. Nontax exposure, such as reclassified workers’ benefit provisions, may also exist. Representatives and practitioners serving taxpayers at risk for worker reclassification should carefully consider the alternatives available to assist taxpayers in becoming compliant. One alternative is the Voluntary Classification Settlement Program (VCSP).

Before the VCSP was established, only taxpayers under audit could resolve worker classification issues and obtain relief from federal employment taxes through the IRS’s Classification Settlement Program (CSP). The IRS established the VCSP to allow taxpayers to come into compliance prospectively while obtaining generous relief from liability for past federal employment taxes. In exchange for voluntary compliance and reclassification of workers as employees, the taxpayer receives the following relief:

To participate in the program, a taxpayer must meet eligibility requirements spelled out in Announcement 2012-45, which modified the prior rules, to permit a taxpayer under IRS audit, other than an employment tax audit, to be eligible to participate in the VCSP. In addition, Announcement 2012-45 eliminated the earlier requirement that a taxpayer agree to extend the period of limitation on assessment of employment taxes as part of the VCSP closing agreement. These modifications favor the taxpayer and further encourage participation in the VCSP.

To participate in the VCSP, eligible taxpayers must apply by filing Form 8952, Application for Voluntary Classification Settlement Program.

A word of caution is in order, though. Most states do not coordinate with the IRS’s VCSP. As such, state tax treatment of taxpayers that participate in the federal program is uncertain.

For a detailed discussion of the issues in this area, see “Options for Compliance With Worker Classification Rules,” by Amy Lehmkuhl, CPA, in the July 2013 issue of The Tax Adviser.

Also look for articles on the following topics in the July 2013 issue of The Tax Adviser: