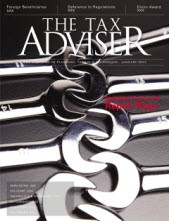 The Treasury Inspector General for Tax Administration (TIGTA) recently released two reports for its study of the IRS Small Business/Self-Employed (SB/SE) Division’s audits of partnerships and S corporations. The findings in both reports are similar: Although the SB/SE audits recommended substantial adjustments, roughly 33% of all the audits in fiscal years 2009–2011 resulted in no change. While this may not surprise many practitioners, the TIGTA reports do offer insights into possible improvements in the audit selection process.

While the IRS has developed many resources to select returns for audit, perhaps the best-known is the discriminant index function (DIF) system, which the IRS has relied on for years. It uses mathematical formulas to score returns based on their audit potential. However, TIGTA found that DIF-selected returns had high no-change rates: 50% for partnerships and 62% for S corporations in FY 2011. This means that the IRS is spending significant time and resources on unproductive audits and unnecessarily burdening compliant taxpayers.

How to Improve Audit Productivity

TIGTA’s analysis found that audits of construction or real estate partnerships with two partners and a reported loss were very effective in terms of proposed adjustments. They found 321 audited returns that resulted in proposed adjustments of $671,000 per return on average. In comparison, DIF-related returns had recommended adjustments of $89,000 per return. Results were similar in the study of S corporations. TIGTA looked at S corporations with one shareholder and losses of at least $25,000 in three or more consecutive years. These returns produced recommended adjustments of $91,861, compared with $46,924 for the remaining audits.

For a detailed discussion of the issues in this area, see “The Number of No-Change Audits Is a Concern,” by Mark A. VanDeveer, CPA, in the January 2013 issue of The Tax Adviser.

Also look for articles on the following topics in the January 2013 issue of The Tax Adviser: