ARSC voted to expose for public comment proposals titled Preparation of Financial Statements, Compilation Engagements, and Association With Financial Statements. An exposure draft was expected at press time to be made public by the end of October, and comments will be accepted through May 2, 2014.

A report would always be required, and the proposed standard would maintain the current requirement to modify the report when the accountant’s independence is impaired.

The new, proposed preparation standard would govern engagements in which the accountant prepares financial statements but does not perform a compilation, review, or audit. The standard would require the accountant to place a legend on each page stating that no assurance is being provided.

ARSC proposed the association standard because AU Section 504 (which was withdrawn as part of the clarity project) addressed unaudited financial statements. ARSC and the AICPA Auditing Standards Board decided the guidance should be moved from the auditing literature to the Statements on Standards for Accounting and Review Services.

The Private Company Council (PCC) approved its first GAAP exceptions for private companies and will forward them to FASB for final endorsement.

If FASB endorses the exceptions, they will be written into GAAP. These would be the first GAAP exceptions approved by the PCC, which was formed last year by FASB’s parent body, the Financial Accounting Foundation, in part to create exceptions and modifications to GAAP for private companies.

The exceptions approved by the PCC would:


The exceptions would take effect for fiscal years beginning after Dec. 15, 2014, and early adoption would be permitted.

A FASB advisory committee asked stakeholders what they thought the board’s standard-setting priorities should be. Respondents said they wanted simplicity and better information.

The top three reasons improvements are needed to financial reporting standards, according to 105 respondents participating in a Financial Accounting Standards Advisory Council (FASAC) survey, are:


The disclosure framework project, whose aim is to streamline disclosures in the footnotes to financial statements and make them more effective, was ranked as the most important project on FASB’s agenda for the next three to five years.

Full results of the survey are available at tinyurl.com/mjwolcm.

The survey asked respondents to rank the importance of various early-stage projects (see chart). The project listing excluded active agenda projects that FASB expects to complete by the third quarter of 2013 or expected to issue an exposure draft in by the second quarter of 2013. 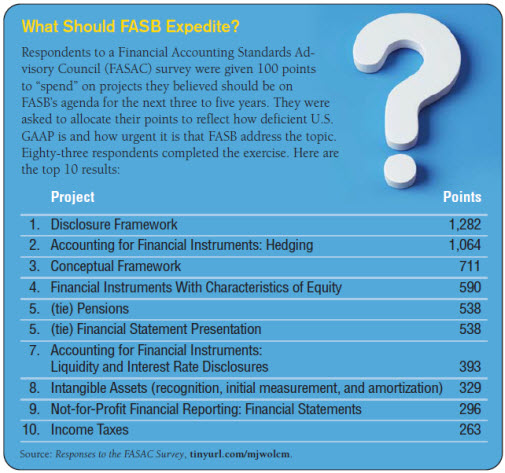 Going-concern assertions are appropriately made by management, the AICPA’s Financial Reporting Executive Committee (FinREC) and the Center for Audit Quality (CAQ) said in comment letters supporting a FASB proposal.

The proposal, Presentation of Financial Statements (Topic 205), Disclosure of Uncertainties About an Entity’s Going Concern Presumption,  is available at tinyurl.com/k5ukatu.

FinREC and the CAQ, which is affiliated with the AICPA, both commended FASB for its work developing a going-concern model that requires preparers to perform a going-concern assessment and, where required, provide footnote disclosures about going-concern uncertainties in each reporting period.

FASB is undertaking the project because U.S. GAAP does not explicitly define financial statement preparers’ responsibilities with respect to disclosing conditions that may give rise to substantial doubt about an entity’s ability to continue as a going concern.

Financial statements currently are prepared under the presumption that an entity will be able to realize its assets and meet its obligations in the ordinary course of business. When liquidation is imminent, the organization starts applying the liquidation basis of accounting in its financial statements.

Currently, auditors are required under U.S. auditing standards to assess whether there is substantial doubt about an entity’s ability to continue as a going concern.

FASB asked stakeholders to evaluate whether possible bias on the part of management would cause its going-concern evaluation to be of little use for investors. Both FinREC and the CAQ said management bias has the potential to affect other aspects of financial reporting, too, so an exception should not be made with respect to going concern.

“Management should be making a going-concern assessment,” Aaron Anderson, CPA, a FinREC member and chairman of its going-concern task force, said in a telephone interview. “It should not be just left in the hands of the auditor.”

The full comment letters are available at tinyurl.com/qztxxon (FinREC) and tinyurl.com/oc99p63 (CAQ).