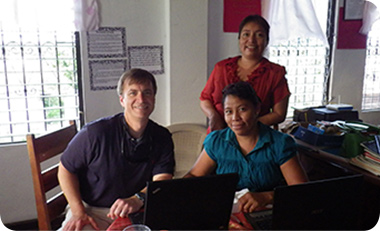 My oldest son, Will, who is a student at Vanderbilt University, got involved with The Belize Project based in Nashville. He went to Belize a couple of spring breaks and did some projects. One of the projects was building irrigation systems and structures at a drug and alcohol rehabilitation center called Jacob’s Farm. When he shared with our family that a lot of work had been done at the farm over the years and the road to the farm had gotten washed out due to a storm, we got together some financial support to help get the road to Jacob’s Farm rebuilt. That’s what set me on the road to going to Belize and meeting the people at the farm and helping them with their financial reporting and bookkeeping, so they could apply for grants from the government of Belize. Then that led me to the schools down there that had similar needs.

These are schools sponsored by the Presbyterian Church in Belize. The elementary school in Belize where I was working, which is called New Life, has 250 students and is in Orange Walk, a town of about 15,000. The typical middle school would have 125 students, and the high school, Cornerstone High School, has about 110 students.

They didn’t have any systems in place. To apply for government grants, they have to show how many students are enrolled, what their current tuition is, what their current salaries and direct expenses of running the schools would be on a monthly and annual basis, and they weren’t really able to do that. One month it would be one way, the next month it would be another way. It was incomplete. They were trying to keep up with tuition manually. Some students pay, some don’t. Some students qualify for government funding, some don’t. There are some subsidies. The more I got into it, the more I realized that these are not easy accounting questions. So I understood why they were struggling.

The project started in 2012. I spent some time with Mac Kelton, the director of the Belize Project, and we had some conference calls with the general manager of the schools in Belize. We started strategizing how we would try to get all the schools on a more standardized financial reporting system, which meant we also had to help them create an accounting system and work flow and so forth. We did some advance work putting the structure in place and gathering all the raw data and then building the charts of accounts.

We did some fundraising through the Alabama Society of CPAs and were able to buy computers, printers, QuickBooks software, training manuals, and office supplies. Last December, I traveled to Belize with Will and my son Andrew, a freshman at Auburn University, and spent a week doing training for 12 people from the various schools and from the general manager’s office on basic bookkeeping, accounting, financial reporting, and QuickBooks. We left all the hardware, computers, software, everything with them to use and said, “Work with this. Let me know what questions you have. I’ll be back.”

In August, I went back to Belize and this time worked with about 10 people from the schools and the general manager’s office and sat down one-on-one getting all actual, live data input into QuickBooks and all their budgets. By the time I finished that week, they were all up and running on QuickBooks with their budgets and current information, ready to start the new school year.

I think the best thing I got out of it was just the experience of being able to leave the state of Alabama and go and apply the skills that I use every day, in another country, and that would really help the people there and have an immediate impact on their lives. Learning to work through some of the adversities down there and the challenges of being in another country, another culture, I think will make me a better CPA.

—As told to Sabine Vollmer, svollmer@aicpa.org ,
a JofA senior editor.