Take a swipe at this

Q: My friend’s phone has a cool feature that allows her to type text messages by sliding her finger across the virtual keyboard rather than typing each key individually. She says this method of typing is much faster once you get used to it. I cannot seem to find this functionality on my smartphone. Is there a way for me to do this on my iPhone?

A: The feature you are referring to is called Swype, and many Android smartphones have this new functionality built in. The procedure for activating Swype varies slightly from one phone to the next, but as an example, I can activate Swype on my Android-based Motorola Razr Maxx by holding my finger on any compose message text box until the Edit text menu pops up, then I select Input method, Swype. Thereafter, the keyboard senses my finger movement and spells out words as I slide my finger across the keyboard, pause, or change finger direction (as suggested in the picture below). Further, Swype’s built-in spell checking does a good job of correcting most of my finger-sliding errors. Swype is currently only available for the Android, Symbian, Windows 7, MeeGo, and Windows Phone platforms, but other platforms are likely to offer this type of functionality in the future. 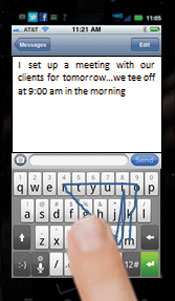