Former U.S. Sen. Paul Sarbanes and former U.S. Rep. Michael Oxley said the regulations they sponsored and saw signed into law a decade ago are not perfect, but led to changes in the corporate culture in the United States and abroad.

Sarbanes, a Maryland Democrat, and Oxley, an Ohio Republican, took part in a conversation on July 30 to mark the 10th anniversary of the Sarbanes-Oxley Act (SOX), which in part enhanced standards for internal controls over financial reporting in the wake of several corporate scandals in the early 2000s. The law set new or enhanced standards for all U.S. public company boards, management, and auditors.

The two shared their thoughts on the wide-reaching impact of SOX—from how it increased communication among participants in the financial reporting process to what it has done for corporate culture—with Mark Beasley, a North Carolina State University accounting professor who moderated the discussion. The former lawmakers spoke about how they think their legislation will have a lasting impression on business in the decades to come.

The discussion was sponsored by the Center for Audit Quality (CAQ), which is affiliated with the AICPA. An archived broadcast of the discussion is at the SEC Historical Society website, sechistorical.org. The event came less than a week after a U.S. House of Representatives subcommittee debated the benefits and costs of SOX—and a bill that would decrease its scope.

Both former lawmakers expressed concern over what Sarbanes called the “erosion” taking place with regard to which companies are required to implement SOX Section 404(b), which requires a public company’s auditor to attest to, and report on, management’s assessment of its internal controls.

The Dodd-Frank Wall Street Reform and Consumer Protection Act of 2010, P.L. 111-203, granted a permanent exemption from SOX 404(b) for public companies with a market capitalization less than $75 million. The implementation date for companies that fell below that threshold had been repeatedly delayed by the SEC. The Jumpstart Our Business Startups (JOBS) Act, P.L. 112-106, was passed in April and defers the effective date of SOX 404(b) compliance for the first five years after an initial public offering for certain emerging growth companies.

The AICPA and CAQ have written multiple letters in opposition to raising the threshold for SOX 404(b) compliance, including letters sent July 31 to the members of the Subcommittee on Capital Markets of the House Committee on Financial Services opposing the SOX 404(b) exemptions in H.R. 6161.

Sarbanes called the JOBS Act exemptions “a scandal waiting to happen” because of the number and size of emerging growth companies that could be exempt for five years from the SOX 404(b) internal control provisions.

The former legislators said they think SOX has helped strengthen corporate ethics and the tone at the top. Oxley cited an Ethics Resource Center study that said 96% of employees knew about the corporate structure and about some of the ethics and compliance guidelines their companies have put in place. “I bet, 10 years ago, that number was half that,” he said.

Jeffrey Hatfield, president and CEO of privately held Vitae Pharmaceuticals, told lawmakers that the costs of complying with SOX 404(b) can exceed $1 million a year for an average biotech company. He said those costs come at the expense of research and development that could lead to medical breakthroughs. Hatfield said the cost of SOX compliance is a significant factor in the reluctance of many biotech companies to go public.

Michael Gallagher, chairman of the CAQ’s Professional Practice Executive Committee, testified that he sees the positive impact of SOX daily in his job as a managing partner of PwC’s audit quality functions. Gallagher said SOX has led to fewer financial restatements, improved disclosures, and earlier identification of fraud.

“The benefits of Sarbanes-Oxley are substantial,” he said. “And in my view, it serves capital markets and investors well.”

Gallagher said the rigorous internal control analysis by management provides assurance that’s important to U.S. capital markets. “The benefit [is] to the cost of capital because of that assurance and that higher level of rigor from that internal control,” he said. 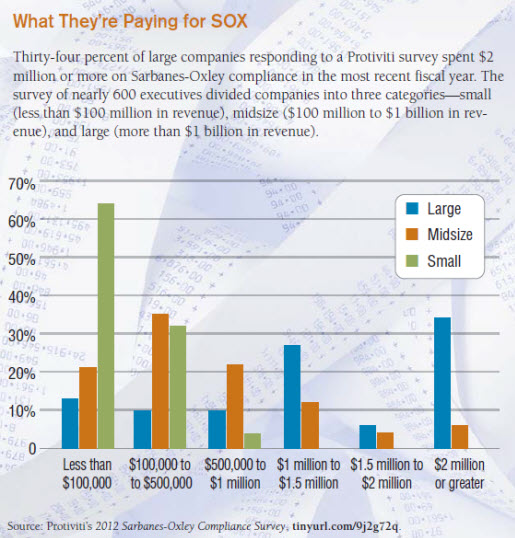