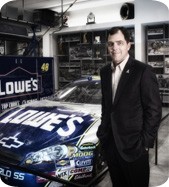 I’ve driven race cars a couple of times. Driving is fun, but those cars don’t have speedometers and they’re so well-built, you don’t really have the sensation of speed. On the racetrack, when everybody is doing 80, 90, 100 mph, it doesn’t feel as fast. It’s a weird sensation.

It’s more fun to ride with someone who knows what they’re doing, and let them run you way out up to the wall and back down through the curve. They’re in the gas early, and you can feel the car sliding. And they let it slide all the way to the wall, and you’re in the passenger seat and the wall’s less than a foot away. That’s pretty exciting.

Some people say we are the New York Yankees of motorsports. I like to think the Yankees are the Hendrick Motorsports of baseball. For the last couple of years, we are probably the best performing team in NASCAR. One thing that makes us good is that we don’t panic. We went from last October until May of this year and didn’t win a single race. Then, we were on a streak where we won seven out of 11 races, but nobody thinks we have it totally figured out. It’s that steadiness that keeps us going.

We run 38 races in 42 weeks, so we’re culturally geared for speed. We make decisions in what most people would consider a hurry and maybe without a lot of analysis, but I think our track record is pretty decent. We believe the execution is more important than the decision.

We don’t win races because we have the best accounting department in racing. The folks on my team are in the not-losing-races business. All the bills are paid on time. So when a crew chief calls a vendor and says, “Hey, can you send me that new product?” the vendor never says, “Gee, I’d like to, but you haven’t paid your bill this month.” That happens in racing. Those types of things are the precursor, the foundation that enables us to hire the Dale Earnhardts and the Jimmie Johnsons to go out and win races.

There’s an assumption that this is so cool and so fun. “Gosh, you get to hang out with the drivers.” If this was the XYZ Widget Co., my office would look the same, and my computer would look the same. A lot of the things we do day to day are just like anybody else. The difference is the subject matter; the extracurricular part is fast-paced and motivating.

The drivers are very much real people. Part of the reason they’re so good is that they’re not arrogant. They understand that it takes everybody doing their little piece. We’ve lost races because of small things. A guy hooked a heat duct up incorrectly, and it blew the rear end out of the car. The drivers appreciate that you’ve got to have all these people. That’s part of what makes them good.

In high school, I was a science and math guy, but I had no desire to major in math. Medicine and science required too much memorization. I thought, there’s accounting, and I’m good with math and numbers. Little did I realize how little accounting had to do with math. The thing I liked was [that] being an accountant was like the engineer for a business. That’s who understands how the business really works.

I would like to think I’ve helped create a culture of financial sustainability. I have tried to help everyone appreciate that making good financial decisions today is what will keep us here tomorrow. Most of them are small. Cumulatively, they have an effect. To help the management team make strategic decisions that will keep us here for the long haul, that’s what I do.

—As told to Neil Amato, namato@aicpa.org ,
a JofA senior editor