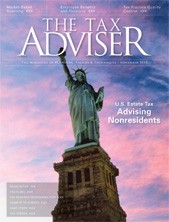 The Compact’s current framework for multistate taxation assigns the total taxable income of a multistate corporation among the various states in which it does business. In an effort to keep this system uniform and up-to-date, the commission has come up with five proposed amendments.

1. Change how states decide which income is apportioned or allocated. Currently, items that qualify as “business income” are apportioned using a three-factor formula that considers the percentage of property, payroll, and sales a multistate corporation has within a state. The first amendment would replace “business income” with a more expansively defined “apportionable income.”

2. Replace the equally weighted apportionment formula with a double-weighted sales-factor formula. Many states no longer require the equally weighted three-factor formula. In its place, there has been a trend to more heavily weight the sales factor. In an effort to promote uniformity, the commission considered five options and decided that double-weighting sales in the apportionment formula achieved this goal.

The proposed amendments are being evaluated by the Multistate Tax Commission’s Executive Committee. Before adopting the amendments, the commission plans to open debate on the amendments to a wider audience.

For a detailed discussion of the issues in this area, see “Proposed Amendments to Article IV of the Multistate Tax Compact,” by Jason Peart, Esq., in the November 2012 issue of The Tax Adviser.

Also look for articles on the following topics in the November 2012 issue of The Tax Adviser: