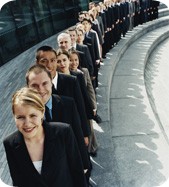 During the past few years, as businesses have focused on surviving a rough economy, human capital development has largely been pushed to the back burner. Workers who survived rounds of layoffs have had more to do and less time to hone new skills or dream of that corner-office promotion. But now, as economies wobble toward improvement, more organizations are viewing human capital as something just as important as a company’s products and services. And new research shows why the subject is gaining attention.

Respondents linked inadequate talent management to the inability to expand into new markets and complete major projects, difficulties forecasting growth, and a slide in their company’s competitiveness. Of financial-sector respondents, 58% said their firm was unable to start a major project or achieve key financial goals in the previous 18 months because of poor human capital management.

“Ideas are the currency of the knowledge economy, so human capital must be managed as rigorously as financial capital,” said Arleen Thomas, CPA, CGMA, senior vice president–Management Accounting at the AICPA, which partnered with the Chartered Institute of Management Accountants (CIMA) in the study. “It is clear from our research that many companies are falling short of their potential because they lack thorough, relevant information about their people to support effective strategy, hiring, and training decisions.”

Many companies are struggling to measure the cost of talent. Executives polled for the CGMA report said they were aware of the importance of talent management, but lacked confidence in the measurement of their human capital performance, and few agreed on who has the mandate or responsibility to do so.

Only one-third of HR directors believe their company has a good understanding of the cost of human capital but not the value of an employee’s skill and experience. In organizations that struggle to understand the full cost and value, 87% of CEOs believe measures of the value of losing and replacing talent are too difficult to obtain. Just 12% of CEOs are confident about the quality of metrics they receive on human capital, and 38% of HR directors said their company struggles to get accurate data and metrics on human capital costs, productivity, value, and ROI.

Companies have some excuse for not making talent management a priority in recent years, said Dow Scott, a professor of human resources at Loyola University Chicago’s Quinlan School of Business. “They’ve come through a huge, huge financial crisis, and they had to thin down, and they probably are not thinking about development,” he said.