Hire a hero, enjoy the benefits 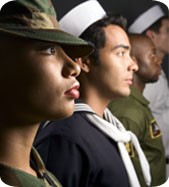 The act created the returning heroes and wounded warriors tax credits. It expanded previous law defining a “qualified veteran” for the WOTC credit (Sec. 51(d)(3)). Under previous law, which continues to apply, a qualified veteran is one who a designated local agency (DLA) certifies as being:

1. A member of a family receiving assistance under a supplemental nutritional assistance program (principally, food stamps) for at least three months, all or part of which is during the 12-month period ending on the hiring date; or

2. Entitled to compensation for a service-connected disability and was either:


The new law adds the two new returning hero tax credit categories. Under the new law, a qualified veteran also includes one who a DLA certifies as:

An individual will be treated as a qualified veteran only if (1) on or before the day the individual begins work, the employer obtains certification from the DLA that the individual is a qualified veteran; or (2) the employer completes a prescreening notice (Form 8850, Pre-Screening Notice and Certification Request for the Work Opportunity Credit) on or before the day the individual is offered employment and submits the notice to the DLA to request certification not later than 28 days after the individual begins work. Under the pre-2012 WOTC program, patience was required on the part of the taxpayer, since the government would often take several months, and in some cases over a year, to issue the WOTC certification before taxpayers could confirm the validity of their credits. Accordingly, the VOW to Hire Heroes Act provided a streamlined certification procedure, which is described below.

In February, the IRS extended the 28- day period to submit Form 8850. (Although the 28-day certification period is in the statute, Sec. 51(d)(13)(D)(ii) gives the IRS authority to provide alternative methods for certification.) Notice 2012-13 permits employers who hired qualified veterans between Nov. 22, 2011, and May 22, 2012, to be considered to have satisfied the certification requirement if they submit a prescreening notice to the DLA by June 19, 2012.

In Notice 2012-13, the IRS also provided guidance on the methods for electronic submission of Form 8850.

The maximum WOTC credits for qualified veterans are shown in Exhibit 1 and calculated as follows:

An employer may be eligible for a returning heroes credit of:

An employer may be eligible for a wounded warriors credit of:

An employer also may still be eligible for a credit of up to $2,400 ($6,000 × 40%) for hiring a veteran who is a member of a family receiving assistance under a supplemental nutritional assistance program, as described above. Employers claim these credits on Form 5884, Work Opportunity Credit.

Calculating the tax benefit to employers

Coupled with a deduction for salary paid, and depending on any applicable limitation of the general business credit, of which the WOTC is a part, the tax benefit from hiring a veteran can be considerable. For example, under the returning heroes credit for a veteran unemployed for at least four weeks, the net salary cost could be as little as 57% of the gross salary for a veteran making $20,000 a year and less than half the salary for a veteran unemployed at least six months (see sample calculations in this spreadsheet). For the wounded warrior credit, the tax benefit relative to gross wages could be even greater—a net salary cost less than one-third of gross wages for a disabled veteran unemployed for at least six months.

The act also makes these credits partially available to tax-exempt employers by making them partially creditable against Social Security tax. The credit is modified as follows:

The IRS cautioned in Notice 2012-13 that, because filing Form 5884-C is not coordinated with liability on Form 941, Employer’s Quarterly Federal Tax Return, for FICA tax, an exempt organization should not reduce its required employment tax deposit in anticipation of the credit. If the organization does reduce its deposit, it may receive a system-generated notice for the balance due, including penalties and interest, which the IRS states will be abated automatically when the credit is applied.

The VOW to Hire Heroes Act enhances and streamlines the prior laborious procedures for receiving certifications for employees under the WOTC, by allowing the state workforce agency to certify that the veteran met the required aggregate period of unemployment by receiving unemployment compensation for that period. The IRS may also, at its discretion, provide alternative methods for employers to receive certification for qualified veterans because of their prior unemployment status.

Under previous law applicable through Dec. 31, 2011, an employer was eligible for a federal tax credit for hiring individuals under statutorily defined targeted groups that included certain veterans. However, no retroactive WOTC credits can currently be claimed for veterans hired before Nov. 21, 2011, if Form 8850 was not previously submitted, since the 28-day deadline for doing so has expired.

A number of states also offer state-level hiring credits and other benefits to employers that hire veterans. Also, many states offer property tax reductions to veterans, and some offer income tax reductions.

The large number of returning veterans will appreciate employers that use this program to increase hiring of those who have served the country. By the same token, employers can reduce their net payroll costs and at the same time contribute to veterans’ reintegration into the civilian workforce by employing them and accessing these valuable WOTC benefits.

Use this downloadable spreadsheet to follow sample calculations of the tax benefit for employers outlined in this article.

Although the work opportunity tax credit expired at the end of 2011 for other targeted hiring groups, Congress extended and expanded it for qualified military veterans hired after Nov. 21, 2011, and before Dec. 31, 2012.

The returning hero and wounded warrior credit amounts are calculated at 40% of wages paid in the first year of hiring to a qualified veteran, with the maximum amount of qualifying wages subject to limits depending on the aggregate period of unemployment in the one-year period ending on the hiring date.

A qualified veteran eligible for the wounded warrior credit is one who is entitled to compensation for a service-connected disability. The highest maximum credit amount, $9,600, is available for hiring a wounded warrior who has been unemployed for periods aggregating at least six months in the one-year period ending on the hiring date. The maximum credit for hiring a veteran with a service-connected disability without regard to periods of unemployment is $4,800.

A returning hero credit of up to $5,600 is available for hiring a veteran without a service-connected disability who has been unemployed at least six months in the one-year period before hiring. A credit of up to $2,400 can be claimed for hiring a veteran unemployed at least four weeks or who is a member of a family receiving supplemental nutritional assistance.

The Tax Adviser is available at a reduced subscription price to members of the Tax Section, which provides tools, technologies, and peer interaction to CPAs with tax practices. More than 23,000 CPAs are Tax Section members. The Section keeps members up to date on tax legislative and regulatory developments. Visit the Tax Center at aicpa.org/tax. The Tax Adviser is available at thetaxadviser.com.