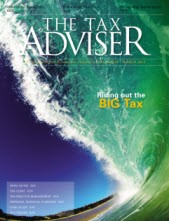 The concepts underlying this tax are relatively basic, but its application can be complex. If a C corporation converts its tax status to a partnership or a disregarded entity, the resulting actual or deemed liquidation, in most cases, would be a taxable transaction for both the corporation and its shareholders. In contrast, if a C corporation elects S corporation status, these immediate tax consequences are avoided. If a corporate-level built-in gains tax were not imposed, a C corporation could make an election to be taxed as an S corporation (assuming it is otherwise eligible to do so) and sell all or part of its assets with a single level of tax. The built-in gains tax is imposed to prevent an S corporation election from being used to circumvent the effects of a taxable liquidation.

For a detailed discussion of the issues in this area, see “The S Corporation Built-In Gains Tax: Commonly Encountered Issues,” by Kevin D. Anderson, CPA, J.D., in the March 2012 issue of The Tax Adviser.

Also look for articles on the following topics in the March 2012 issue of The Tax Adviser: