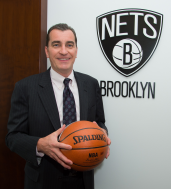 Although I have been a fan of the Nets since probably seventh grade, I didn’t get here because of my focus on sports. I was brought here because of my focus on entertainment. When you look at what’s happening on the court, essentially they’re just creating entertainment for a crowd. I used to be CFO at concert promoter Live Nation, in the live entertainment business. Now, instead of playing a guitar, they’re playing basketball. So the same skills apply in terms of managing your expenses per event, which is a game or a concert, and forecasting for what has yet to happen, and essentially re-creating your product every year.

Our move from New Jersey to Brooklyn this year is transformational, and it’s one of the things that supported our explanation of the business to the credit rating agencies. When we were in New Jersey, it was tough to get people to go out to the swamp they call the Meadowlands. Now if somebody hands you tickets to a game because they got stuck at work at 5 o’clock, you can hop on the subway and grab dinner at the new arena, the Barclays Center, from anywhere in Manhattan in about half an hour. You can have that spontaneous access, a mass transit connection right underneath the arena. That is going to make it incredibly easy for people to get to the games, and the fact that we have this pent-up desire for professional sports that exists in Brooklyn is going to help us as well.

The density of the population, the access, and that pent-up demand is a formula for success. Ever since 1957, when the Dodgers left, they haven’t had a professional sports team in Brooklyn. We feel that we will fill that void, and if our brand launch recently is any indication, we’re doing five times better on our merchandise than we did in New Jersey. So far, what we’re seeing in terms of sales—in tickets, sponsorships, and suites—it’s off the charts.

In my career in this live entertainment business I have made sure I go out into the arena during games and concerts to experience events just as my customers do. So I know how they are experiencing it and how to react to it operationally, and that helps me do a better job on my financial side. I’m better able to predict what the audience’s reactions are going to be, what the concession lines are going to look like, and enhance the way that people approach the concessions and therefore increase our profitability.

In walking around the arena as I do, I sit and see how the fans enjoy the experience. Once I ended up sitting next to Richard Gere, who was in disguise. As I walked him through the building, I took him through some back alleyways so he wouldn’t end up fighting the crowd. He tugged on my arm and asked if I could introduce him to a guy he saw standing nearby. It was CC Sabathia, the New York Yankees pitcher. So the whole experience was pretty mind blowing, to introduce Richard Gere to CC Sabathia and have him enjoy the moment as much as I did.

Early in my career I was at Ernst & Young, and I was exposed to everything from movie companies to financial firms. Orion Pictures, EMI records, and Warner Music were clients. I also worked on banks. Paine Webber, American Express bank, and some smaller banks and brokerage firms were clients as well. I got this wide array of experience that I still draw from today when talking about an acquisition deal or the underwriting, or other banking relationships in renewing my loans.

There was a time when I suggested that we invest in a foul-shooting coach. I told the staff that I was happy to find the money if they could find the right coach. That was several years ago, and they didn’t take that advice. Although not so much on the basketball side, I do tend to view finance as having a path forward to all departments. All decisions people are making with regard to their departments involve money. So I tend to stick my nose in marketing, operations, and, to a lesser extent, basketball operations.

I have fun working because I have the opportunity to go out there and lift people’s spirits. When the band comes on stage or when the basketball team hits a key 3-pointer or a key foul shot or a jump shot and the fans erupt, you know you have a part in making lasting memories for these people. And you top that off with the opportunity to bring a kid down and introduce him to one of the players. One memory I have is of taking a kid down to meet Shaquille O’Neal, and five years later he is still emailing me about how exciting it was. It’s thrilling to deliver that kind of fun.

—As told to Ken Tysiac, ktysiac@aicpa.org , a JofA senior editor