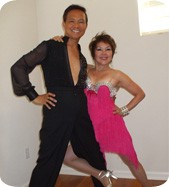 Sometimes when people make small talk, they ask, “What’s your favorite television program?” Without hesitation, I answer, “Dancing with the Stars.” My wife and I watch the show almost religiously, because we are ballroom dancers. Dancing, to us, is a way to get away from the stresses of running a small CPA firm.

Do not get me wrong: I love my work as a CPA, although it took me a while to embrace accounting. When I was growing up in the Philippines, I originally wanted to be a doctor, but my parents persuaded me that studying accounting would be more practical. I managed a retail store they owned, so I could see how an accounting education would be good for me.

Although I majored in accounting, I did not go into that field immediately. I immigrated to the United States and worked as an insurance adjuster for a number of years before deciding to take the CPA exam and get the required accounting experience. I was in my mid-30s when I earned my certification. My career as a CPA has also not been linear; I worked in several different capacities for both for-profit and nonprofit companies before opening my own firm in 2006, where my wife, Teresita, works with me as a staff accountant. Because we work in the same office, my wife and I believe it is very important to leave the challenges of work behind when we go home. That’s why dancing is so important to us.

We have always had a passion for dancing, ever since we were married more than 30 years ago. It wasn’t until 1997, however, that we got into ballroom dancing. We had been at a club, dancing conventionally, when a woman introduced herself as a dance instructor and invited us to take ballroom dancing lessons with her. Ballroom dancing, incidentally, refers to the five international Latin styles—cha-cha, rumba, jive, samba and pasodoble—and five international standard styles of dance— waltz, tango, quickstep, Viennese waltz and foxtrot—that are regulated by the World Dance Council. (We like the Latin dances best!)

As we began to learn ballroom dancing, we had to master the steps for each of these different styles of dancing, as well as to monitor our timing, rhythm and posture. It is hard work! But once we took our first lessons, my wife and I were hooked. We turned our two-car garage into a dance studio, where we practice several days a week: We turn up the stereo, slip on our dancing shoes (yes, there are real dancing shoes, with special soles to glide on the dance floor), and practice the steps and routines.

Dancing has given us some special moments. One was at our son’s wedding, which was in the Philippines. He asked us to put on an exhibition, which we limited to one number, despite the audience’s appreciation. After all, the day belonged to him and his bride!

Another special moment was when we entered a local contest about five years ago. Our teacher choreographed the two-and-one-half-minute routine and worked with us until we had it down pat. We came in second place in that competition. The next contest, we took the crown. It was a lot of fun, but we have not entered any more contests. It is too nerve-racking.

Recently, we had a really special time. We went on a seven-day cruise to Mexico. In the atrium of the ship, several times a day, there was good dancing music. We didn’t understand why people just sat around instead of getting out on the dance floor. My wife and I got on our dancing shoes and enjoyed the music. All of a sudden, we realized that people were standing by the railings on all the decks, looking down on us and taking pictures! The applause surprised us; people asked if we were part of the crew!

When we dance, our aim is just to enjoy ourselves, not to be the center of attention. We go to monthly dances at a club, as well as to local charity balls. To decide if we want to attend an event, we ask, “What kind of music will you have?” That’s more important than the menu.

I encourage all CPAs to get into ballroom dancing. You’ll find that dancing correlates well with accounting: You have to know the rules and regulations, follow the steps and be disciplined. But the wonderful thing is, when you dance, your worries just seem to go away.

—As told to Linda Segall, linda@segallenterprises.com,