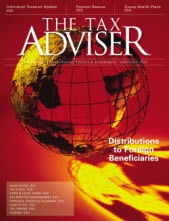 At this time of year, many charities see an upsurge in donations, and the federal tax deduction for charitable contributions is a significant incentive. The Tax Court recently highlighted how an apparently slight oversight in documentation can upend the interdependent relationship between donee and donor.

The substantiation requirements for monetary donations of less than $250 remain fairly informal under Sec. 170(f)(17): The donor should maintain a bank record of the contribution or written communication from the donee stating the name of the donee organization, as well as the date and dollar amount of the donation. For donations of $250 or more, Sec. 170(f)(8) contains more stringent substantiation requirements: The donor must obtain a contemporaneous written acknowledgment, stating the amount of the contribution, whether the donee provided goods or services in consideration for the donation, in whole or in part, and a good-faith estimate of the value of any goods or services the organization provided. If goods or services received consist solely of intangible religious benefits, the contemporaneous documentation must contain a statement to that effect.

In Durden, T.C. Memo 2012-140, the Tax Court’s literal interpretation of Sec. 170(f)(8) cost the taxpayers a charitable contribution deduction because of what might seem to be an inconsequential oversight. The Durdens claimed a charitable contribution deduction for cash contributions to their church. Most individual contributions exceeded $250. The Durdens produced a letter from their church acknowledging the contributions, as well as canceled checks supporting the amounts of the claimed deduction, but the IRS declined to accept the acknowledgement on the grounds that it did not contain the required statement regarding whether goods or services were received in consideration for the contributions. The IRS disallowed the deduction.

The Durdens subsequently obtained a second written acknowledgment from their church with the required language, but the IRS refused it because it did not meet the contemporaneous written acknowledgement requirement, which defines contemporaneous as the earlier of the date of filing or the extended due date, including extensions, of the return. The Tax Court refused to consider the second acknowledgement but did agree to consider whether the first acknowledgment met the substantiation requirements.

The Durdens argued that substantial compliance with the substantiation requirements should be sufficient to allow the deduction. The Tax Court disagreed, pointing to the language of Sec. 170(f)(8)(A), which states that no deduction shall be allowed unless the provisions of Sec. 170(f)(8)(B) are met. Absent substantive language in the acknowledgment regarding goods or services received in consideration, the Tax Court held that the amount of the deduction cannot be known or calculated. Therefore, the court denied the deduction.

For a detailed discussion of the issues in this area, see “Contemporaneous Documentation of Charitable Contributions,” by Carrie Sowders, CPA, in the December 2012 issue of The Tax Adviser.

Also look for articles on the following topics in the December 2012 issue of The Tax Adviser: