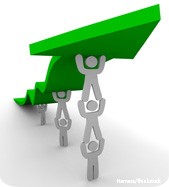 Accounting firms aren’t all the way back to where they were before the Great Recession, but they are making progress. That’s one of the many findings of note in the 2012 National Management of an Accounting Practice (MAP) survey, sponsored by the AICPA Private Companies Practice Section in association with the Texas Society of CPAs. The biennial benchmarking poll, conducted from May through August, generated responses from more than 2,300 U.S. accounting firms.

Those responses paint the picture of a profession slowly but steadily regaining ground lost in the biggest economic earthquake since the Great Depression. The survey results also reveal divergent trends in partner and staff compensation, increased adoption of fixed-fee pricing, and the growing importance of leveraging technology to accounting firms of all sizes.

This article and the accompanying charts highlight the top takeaways from the 2012 PCPS/TSCPA MAP Survey. Full results are available at aicpa.org/pcps/MAP2012.

Nearly two-thirds (66%) of the accounting firms surveyed reported year-over-year growth in client fees, up from 55% in the 2010 survey but short of the 80% that reported client-fee growth in 2008. The magnitude of growth showed the same pattern, with the gains shown in the 2012 survey being larger on average than those recorded in 2010 but not back to the standards set in the 2008 poll, which stands as a good benchmark for recovery because it reflects financial results achieved before the start of the economic downturn. For example, 43% of the firms in the 2008 survey reported revenue growth of 10% or more, compared with 20% in 2010 and 24% in 2012.

The look back to 2008 also illuminates a couple of interesting patterns in compensation.

Overall partner compensation jumped 10% from 2010 to 2012 and posted healthy gains in all of the revenue categories tracked in the survey (see Exhibit 1). Partner compensation averaged $188,500, mirroring the $188,572 averaged in 2008. The drop in partner compensation between 2008 and 2010 indicates that partners left some of their profits in their firms to help ensure stability during the height of the economic storm. With their firms now on more stable footing, partners took home more of the “accumulated” profits to compensate for the cutbacks they made in previous years.

Staff compensation slipped a bit in 2012 after posting big gains in 2010 (see Exhibit 2). New professionals took the biggest hit with a 5% drop compared with 2010, though their average salary remains 27% higher than it was in 2008. That pattern, which held true across most firm sizes, appears to indicate that firms raised nonpartner salaries in 2010 to aid in staff retention, then allowed them to drift back down as part of an effort to equalize salaries back to the 2008 standard.

Charging by the hour remains the champion of accounting firm billing practices, but fixed-fee arrangements are closing the gap. The most remarkable sign of this trend comes among firms with $5 million to $10 million in annual revenue. While 90% of those firms bill at least some work by the hour, 93% offer fixed-fee services, up from 70% in 2010. The percentage of the largest firms with fixed-fee offerings jumped 25 percentage points to 96%, the same as the percentage that bill by the hour (see Exhibit 3).

The use of value pricing increased among all firm sizes and by at least 10 percentage points in all revenue categories except $10 million and up. All told, 56% of firms are using value pricing, up from 41% in 2010.

The increasing prevalence of fixed-fee arrangements among the largest accounting firms contributed to a drop in the percentage of their revenue that comes from hourly billing. Firms in the two largest revenue categories posted, on average, a seven percentage point drop in the portion of fees based on hourly billing, to 77% among the largest firms and 76% among those in the $5 million to $10 million group.

Among all firms in the survey, 78% of fees came from hourly billing, essentially the same as in 2010. That makes sense, considering that the average billable hours for full-time-equivalent professionals continued to hold steady after being essentially flat between 2008 and 2010.

Billing rates varied greatly by position and firm size (see Exhibit 4), as did the level of change from 2010. Overall, the average billing rate for partners rose 2%, to $183, but the variation among different firm sizes ranged from an increase of 8% for the smallest firms to a drop of 2% for the largest firms. Changes in rates among the other positions were mixed.

Utilization, the chargeable percentage of compensated hours for partners and professional staff, remained essentially unchanged at 68%. Partners saw their utilization dip to 59%, from 61%, while the other positions posted gains of one or two percentage points, with the exception of senior managers and new professionals, which held steady at 69%. The utilization rates for the other positions were as follows: directors (64%), senior managers (70%), managers (70%), senior associates (73%), and associates (72%).

The relative importance of various services to the top line was little changed across the board in the 2012 survey (see Exhibit 5). Tax continues to be the top generator of client fees, with tax services for individuals accounting for 29% of fees and other types of tax work contributing almost 25%. The smaller the firm, the bigger the impact of individual tax work on client fees. Such services account for 35% of client fees at the smallest firms, and the percentage goes down in each subsequent revenue category until it hits 14% for the largest firms. Nonindividual tax work makes up between 22% and 25% of client fees in each of the revenue categories.

Audit services account for almost 11% of client fees overall but, like individual tax work, steadily changes from small firms to large firms, only in the opposite direction.

All of the services tracked by the MAP Survey contributed about the same percentage of accounting fees in 2012 as they did in 2010. The only exception was payroll, but that was because the category was added for the 2012 survey and not tracked previously.

On the benefits front, little has changed since 2010. The benefits most likely to be offered continue to be payment of continuing education courses (79%), professional dues (76%), or professional licenses (73%), followed by retirement plans and individual health insurance (both at 66%). The smallest firms made the biggest gains, with 61% now offering at least one of the benefits tracked by the MAP Survey. That’s up from 54% in 2010.

On the downside, the percentage of firms in the three revenue categories between $200,000 and $1.5 million offering health insurance dropped by four to five percentage points.

On a brighter note, 23% of firms reported that they provide paid time off for activities such as professional training. That’s up from 13% in 2010.

Accounting firms have made strides in implementing technology over the past couple of years, though there remains plenty of room to do more.

For example, 42% of firms in the 2012 survey reported having a client portal, up from 28% in 2010. Strong gains also were posted in the percentages of firms that use social media and have established a paperless work environment (see Exhibit 6).

Exhibits 7 and 8 contain data that was revised subsequent to publication of the November 2012 JofA article “2012 MAP Survey: A Snapshot,” page 14.

Jeff Drew is a JofA senior editor. To comment on this article or to suggest an idea for another article, contact him at jdrew@aicpa.org or 919-402-4056.

The Private Companies Practice Section (PCPS) is a voluntary firm membership section for CPAs that provides member firms with targeted practice management tools and resources, including the Practice Growth & Client Service Center, the Human Capital Center, and the Succession Planning Resource Center, as well as a strong, collective voice within the CPA profession. Visit the PCPS Firm Practice Center at aicpa.org/pcps.