On May 8, the House Ways and Means Oversight and Social Security Subcommittees held a hearing on tax fraud involving identity theft. The same day, the Treasury Inspector General for Tax Administration (TIGTA) released a report saying the IRS does not handle identity theft issues well (TIGTA Rep’t No. 2012-40-050). The inspector general, J. Russell George, also testified in the hearing concerning the report.

The congressional hearing examined how identity theft contributes to tax fraud and whether the IRS and the Social Security Administration are doing enough to protect Social Security numbers and to prevent and detect false tax returns filed by identity thieves.

TIGTA reported that as of Dec. 31, 2011, the IRS’s Identity Protection Incident Tracking Statistics Reports showed that 641,052 taxpayers were affected by identity theft in 2011.

TIGTA made eight recommendations, which the IRS agreed to. TIGTA recommended that the IRS:

Also among witnesses in the congressional hearing was National Taxpayer Advocate Nina Olson, who said the Taxpayer Advocate Service (TAS) she heads has also seen a surge in identity theft cases, with a 97% increase in fiscal year 2011 over fiscal year 2010 (see graphic, “Identity Theft Now Top TAS Issue,” below). The trend appears to be continuing in 2012, she said, with a 43% increase in the first two quarters over the same period in 2011. 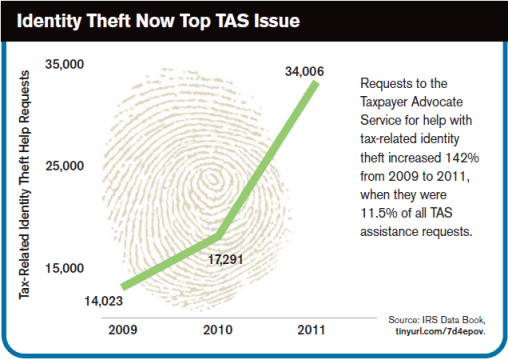