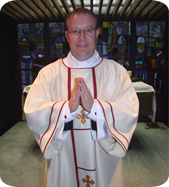 Some people use the words “career” and “vocation” interchangeably. They really aren’t the same thing. I had a career as a CPA; now, however, I am in the final stages of beginning my life’s vocation—serving as a Catholic priest for the Diocese of Lincoln, Neb.

People sometimes ask what attracted me to the priesthood. I was not necessarily attracted or opposed; rather, I was called. God talks to each one of us, no matter our religious affiliation, by birth or choice. It is just a matter of listening.

In some regards, I started “listening” as a boy when I realized that I had a real passion for service. As early as high school, I became involved in helping others. I continued with service work throughout college, and I continued that work as an adult, by becoming active in Kiwanis and Big Brothers Big Sisters.

After graduating from the University of Nebraska with a master’s in accounting in December 1997, I accepted a position with a public accounting firm. I made great friends at the firm, and I learned a great deal, but after three years of being out of town most of the time, I desperately missed doing community service.

I was at a crossroads: Should I give in to the growing feeling I should become a priest, which would allow me to do service full time, or should I go into the corporate world of accounting, which would allow me to continue a satisfying career as well as give back to the community? I struggled with the answer as I interviewed with a number of companies, including Midwest Tile, Marble and Granite in Lincoln, a company owned by four brothers named McCabe. The fit as CFO with Midwest Tile felt right, and was perhaps even enhanced when I discovered that the brothers’ uncle, the late Monsignor McCabe, had twice been my teacher in junior and senior high school!

Many priests came to the company to pick out tile or marble for their parish construction projects. I had been associated with priests mostly in their clerical role. Now I saw them in a different light, as “regular guys” (like me), who were busy running the business of their parishes.

Five years into my job as CFO at Midwest Tile, I was reading the weekly newspaper published by the Diocese of Lincoln and saw an article announcing changes in priests’ assignments. That short article was a strong call from the Lord. It was so overwhelming I booked an emergency flight to Duluth, Minn., to consult with my uncle, who was bishop there. He helped me sort out my motivations.

I entered the seminary in 2006 for six years of study. Last year, I was ordained a transitional deacon, similar to an internship every would-be priest holds. In May, I will be ordained to the priesthood and will serve in the Diocese of Lincoln.

I don’t know how or if the bishop will tap into my background and skills as a CPA. I would be pleased if he were to take advantage of my financial background, because I love my occupation and former career. Bottom line, I will be a priest who just happens to be a CPA.

I’ve had the fortune for parts of the last four years to work in the finance office for the diocese, where we have a priest who is the financial officer. I’ve been able to see what goes on there, using my background to help out the well-being of a parish or diocese or church in general. Part of our job is to be stewards of the donations people make for the church’s well-being.

My master’s degree from the seminary is in pastoral theology, which draws on my accounting career and my forthcoming priesthood, focusing on financial training of priests and seminarians. My background will come into play with the 50-page paper I have to write, which I’m aiming to finish around April 15. I am basically treating this as another busy season, so it is similar to where I was 11 years ago in public accounting.

The things that have happened in my life are elements of gifts God has given me—loving accounting, teaching, helping others, being of service. I used these loves as a CPA, and now I will be able to bring them together in my new life as a Catholic priest.

—As told to Linda Segall, linda@segallenterprises.com , a freelance writer from Jacksonville, Fla.