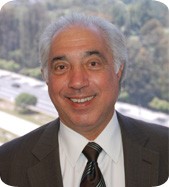 I am fortunate to have a successful practice comprised of a partner and 12 staff members; we work with high-income individuals in the Los Angeles area. I am also fortunate to have had both local and national television exposure. And I owe these things to an unlikely source—the Internal Revenue Service.

When I graduated from California State University–Northridge in the late 1960s, I accepted a position with one of the Big Eight firms. Although my adviser knew my career decision, he nagged me into interviewing with the IRS. I was hesitant; during that anti-war era, working for the government was not an attractive career option. But I realized that the IRS would give me great training in taxes—my chief accounting interest. So I went for the interview and became an IRS agent.

In 1970 I was doing graduate work as well as teaching tax law at Cal State–Northridge while working for the agency. At that time, we agents saw a growing problem with questionable tax preparers who were scamming low-income people. I didn’t like what I saw, so I approached the dean at Cal State–Northridge with a plan: I asked him to give me 10 students, to whom I would teach a 24-hour class in tax preparation, at no cost to the university. In return the university would not charge the students tuition for the class, but the students would volunteer to go into the community to do free tax returns for low-income residents. People lined up around the block waiting for us.

The following year, eight of the original 10 students had not yet graduated. I arranged with the university to get them an additional academic credit if they each recruited 10 more student volunteers, who would earn two credits. Although the school charged tuition this time, I still volunteered my teaching. The second year we had almost 100 students doing returns.

This college-volunteer effort significantly strengthened the Volunteer Income Tax Assistance (VITA) program, which the IRS began in 1969. As a result of the Cal State–Northridge program, questionable tax preparers went away, since they no longer had customers. Now, 40 years later, the Cal State VITA program, led by a former student of mine, Cathy Jeppson, is still going strong. The original program has also served as a model for other university VITA programs. I am proud that I was instrumental in its formation. In April 2010 the commissioner of the IRS presented me with an award for 40 years of service to the program.

The IRS was good to me. It developed my leadership skills and helped me gain self-confidence as I took on increasingly more responsible roles. But, after 12 years, I advanced as far as I could go; I decided to resign. I was then recruited to join a firm in Los Angeles. One of my first clients was a former U.S. senator from California, who introduced me to the then-president of KABC-TV in Los Angeles, John Severino. Severino put me on local news in a recurring segment on tax issues. Later he became president of ABC and arranged for me to be on the Regis show. Regis Philbin subsequently became a client when I opened my own firm in 1981, and I have appeared on his show a number of times, most recently in April 2010.

Although I left the IRS many years ago, my spirit is still with the agency. In December 2009 I was selected by the Treasury Department to be a member of the Taxpayer Advocacy Panel (TAP), through which I listen to the public regarding problems with the IRS and I make recommendations for improving the agency. This has been a gratifying experience that I recommend to all in our profession to consider. It does require a 300–500-hour volunteer commitment over a three-year period.

I am very grateful I listened to my adviser and started my career with the IRS. My advice to all new accountants: Look for alternative careers and follow your interests. You’ll be glad that you did.

—As told to Linda Segall (linda@segallenterprises.com),