Q: I just bought a new computer loaded with Windows 7, and there was no backup disk in the box. When I checked the store where I bought it, I was told that operating system and system recovery CDs are no longer supplied with new PCs and I should make my own system recovery disk. However, no one in the store could tell me how to do it. Can you help?

A: The store’s explanation is only partially correct. It’s true that fewer new PCs are being shipped with such backup disks, and that’s a shame because in my view it’s an unwise economy of just a few cents. However, some manufacturers will send you a disk for a small fee.

System recovery disks are critical tools. In the event your computer won’t boot up, all you need to do is load the disk and, unless you have a really bad problem, the startup will proceed smoothly.

Now, to your question about creating a disk. Windows 7 makes it very easy to burn your own system recovery disk, or, as it’s now called, the system repair disk. But if you’re still running XP and you’ve misplaced its emergency disk, creating one is a bit more complicated. For step-by-step instructions, go to support.microsoft.com/kb/299526. 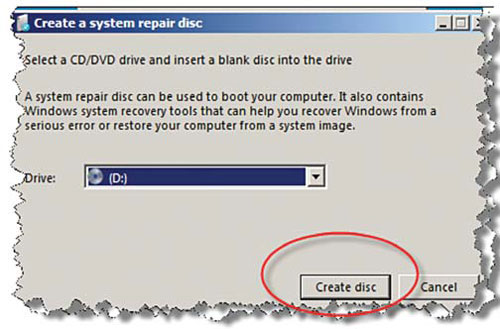 Here are the steps for creating a disk for Windows 7: Slip a blank recordable CD or DVD into the CD drive and click Start. Then type repair, select Create disc (see screenshot above) and follow the instructions on the screen.

The new disk will also include several recovery and diagnostic tools, including a feature for creating a System Restore point that can revert your PC to an earlier condition when it worked correctly.

Although System Restore is supposed to create a new restore point every time your PC undergoes a major change (a new program, driver, etc., is added, removed or updated), there is always a chance that your operating system will not consider the change significant enough and will fail to trigger a restore point, which is why I create one manually whenever such a change occurs.

For directions on how to create a System Restore shortcut, see “Create a Shortcut for Easy Access to System Restore,” Dec. 2008, page 103.