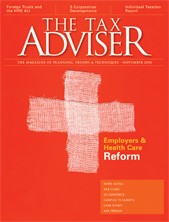 The sweeping changes made by the health care reform legislation (the Patient Protection and Affordable Care Act and the Health Care and Education Reconciliation Act of 2010) will become effective over the course of several years. However, some employer-related changes are effective as early as the first plan year that begins on or after Sept. 23, 2010 (Jan. 1, 2011, for calendar-year plans). These first-up changes will impose the following on group health plans:

While insurance policies that were in effect on the date of enactment (March 23, 2010) are generally grandfathered (for both the current term and any renewal terms), four of these five insurance market reforms apply to grandfathered plans. Thus, except for the preventive health services coverage requirement, these principal reforms are effective for all plans for plan years beginning on or after Sept. 23, 2010.

Some programs established under the health care reform legislation are already in effect. The reinsurance program for early retirees (which reimburses participating employer plans for a portion of the cost of providing health insurance coverage to early retirees) became effective on the date of enactment. Employers accepted into this program will be reimbursed for costs incurred on or after June 1, 2010. The program is set to expire on Jan. 1, 2014 (or earlier, if the $5 billion in federal funding is exhausted).

Other notable changes will soon be effective. For tax years beginning in 2011, the only medicines that will be reimbursable by health flexible spending arrangements (FSAs), Archer medical savings accounts (MSAs), health reimbursement accounts (HRAs), or health savings accounts (HSAs) are prescribed drugs or insulin. Beginning in 2011, nonqualified distributions from HSAs and Archer MSAs will be subject to an excise tax of 20% (increased from 10% for HSAs and 15% for Archer MSAs). Also beginning in 2011, employers will be obligated to report on Form W-2 the cost of providing employer-sponsored health care.

For a detailed discussion of the issues in this area, see “Current Developments in Employee Benefits and Pensions (Part I),” by Deborah Walker, CPA, and Hyuck Oh, CPA, J.D., in the November 2010 issue of The Tax Adviser.