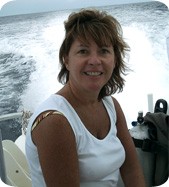 I always tell people don’t forget your roots. I don’t care how successful you are, how much you’ve accomplished. Don’t forget to give back to people who have helped you along the way.

I was supposed to be a teacher. I was always good at math. My father, Tony LoCastro, owned a milk business. He was a milkman. Starting when I was around 11 years old, I would do his bills for him. He’d give me a dollar, two dollars a week, and I would do his books for him.

My father didn’t graduate high school. He was one of those guys who took care of the family. My mom, Angie LoCastro, got married at 17, finished school and then became a bookkeeper.

My mom forgot to tell me that girls don’t major in math. She always encouraged me to pursue math because it interested me. I took an accounting course and picked up a minor in accounting at Montclair State University and had a professor tell me, “You’re good at this. You should really think about going into public accounting. They are hiring women.” My aunt Jeanne, who was a teacher and my mentor, also felt I would have a better career in public accounting than in teaching.

At Montclair State I’m on the Foundation Board and School of Business Board. That’s my way of giving back to the college, because if it wasn’t for their placement office and the professor who encouraged me to get into public accounting, I would never have had the career I did.

I always tell people you have to really love what you do. For whatever reason, I enjoy the IT piece of accounting. In the ’70s or ’80s there were not a lot of men or women who were CPAs and had a technology background. When I worked at ADP part time in college, I got a taste of computer systems. I had an affinity for it. I was lucky I was able to figure out a way to combine math, accounting and technology.

I was the first woman partner at J.H. Cohn in 1985. I worked full time after having each of my three children, working until the day before I gave birth. Back then there were no part-time female partners. You either were full time, or you weren’t going to be a partner.

I was the first female partner for Arthur Andersen in New Jersey in 1994 and Ernst & Young in New Jersey in 1996. I led the local entrepreneurial consulting practices for both firms. I joined Deloitte in 1999. After I left Deloitte, I spent about three years or so in the interim management services space. Now I’m an adviser to the operations business of Alvarez & Marsal’s private equity group. As long as I have the energy and the good health, I won’t fully retire. It’s just my way of staying sharp and staying in the game.

The accounting profession is pretty stressful. My husband, Larry Teitelbaum, is CFO and a partner now in a private equity firm, and I was in the Big Four most of my career. We’ve always liked the water. My husband was certified to dive on a New Jersey Society of CPAs trip in Maui. We like to go to the islands. So for awhile he’d go diving, and I’d be there at the beach. When my son was a teenager, we were at the beach in Turks and Caicos. I was 51. I decided, “I’m not getting any younger.” I decided to just go for it and get certified with my son. He was 16, an age when you think your mom’s not cool anymore. That was a pretty cool thing to do. I got my AARP card and my certification at about the same time. I’ve done over 50 dives. We’ve been to some of the best dive spots in the world. It’s very relaxing, very soothing. You know how you look at aquariums and see pretty fish, and it makes you relax? That’s what this is like, but it’s more up close and personal. It’s a good release.

—As told to Kim Nilsen, knilsen@aicpa.org, the JofA’s editorial director.