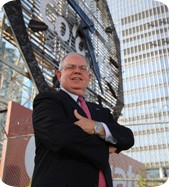 Paul Stahlin is acutely aware that his term as AICPA chairman appears to be on course to intersect with a series of major changes for the profession. The year ahead holds the potential for a shift to different accounting standards for private companies. FASB and the International Accounting Standards Board (IASB) will get fresh leadership and face a June 2011 deadline for what they’ve deemed their top convergence projects.

Meanwhile the SEC is slated to vote on whether to mandate the use of IFRS for U.S. public companies. Tax preparers will face new IRS requirements, and businesses will grapple with the impact of health care and financial regulatory reform. A commission will explore the future of accounting education.

“We’re looking at a lot of very heady issues,” Stahlin said. “I’m sure that every chair as they emerge into their position thinks, ‘This is a time of great change.’ And for every chair, I think that’s very true.” But the pace of change has accelerated in recent years, and the demands on CPAs to think globally are rising.

“This is an absolutely unique time in history,” said Gary Previts, chair of the accounting department at Case Western Reserve University and a trustee for the Academy of Accounting Historians. “There has never been this large a global demographic. There has never before been such instant communication.”

Fortunately for Stahlin, the challenges that threaten to keep him awake at night are the very same opportunities that energize him at work. “Complexity is something we live with. Complexity is one of the reasons why we’re so valued.”

Stahlin was elected this October to a one-year term as AICPA chairman. The regional president of Skylands Community Bank in New Jersey, he is the AICPA’s third chair from outside public accounting in 12 years and the second chair from business and industry. He started his career in public accounting, spending six years at Price Waterhouse & Co., a predecessor to PricewaterhouseCoopers. In 1980 he went to work as a corporate controller at the large regional bank Summit Bancorp, a move that began a career in finance that has included involvement in a dizzying number of bank mergers and acquisitions.

“Paul will be a great ambassador for the profession,” said Ralph Albert Thomas, executive director of the New Jersey Society of CPAs. “He’ll be able to help us identify the kinds of things that will make the AICPA and also the state societies more relevant to CPAs in industry.” His experience in public accounting and with large and small businesses positions him to be attuned to the challenges CPAs face in those arenas, Thomas predicted. “I think he can talk shop with the CPA working for a small $5 million or $10 million operation or a corporate controller or CFO in a Fortune 500 company.”

Hobbies: Tennis, golf, volunteering, spending time with family and at the beach

A lifelong New Jersey resident, Stahlin spent his early years in Jersey City, N.J., across the Hudson River from Wall Street and the Manhattan skyline. “When I got up in the morning, I looked out and I could almost reach out to the Statue of Liberty. My front window looked out on the Statue of Liberty,” he said. Several of the men in his family were engineers involved in the development of New York City. His grandfather worked on the design and engineering of the first subway line under a New York building and headed a professional engineering society in New York. His uncle and cousins helped design the Verrazano-Narrows Bridge, which connects Staten Island and Brooklyn.

“In college I was torn between philosophy, psychology and accounting,” Stahlin said. “But my father was a great influence, and he said, ‘Well, if you want to make money in this world, you need to learn business. And if you want to learn business, you need to learn accounting. Accounting is the foundation for all of business. And even if you don’t want to become an accountant for life, it leads to other paths,’ which was really terrific advice.”

Stahlin counts change for private company accounting standards as one of his and the Institute’s top goals for the coming year. In December, a blue-ribbon panel sponsored by the AICPA, the Financial Accounting Foundation and the National Association of State Boards of Accountancy is due to finalize its recommendation about possible alternatives for private company standards and structural change related to private company financial reporting.

Another major focus of his term is responding to the economic strains on individuals, companies and the country. Those stressors permeate all aspects of the profession, influencing action and in some cases creating inaction. Meanwhile, CPAs will need to help businesses navigate regulatory issues, including health care reform, financial regulatory reform and proposed IRS initiatives including tax return preparer registration and the reporting of uncertain tax positions.

In the wake of the financial crisis, Stahlin sees two solutions taking on more prominence—financial literacy and enterprise risk management.

As he travels the country speaking to CPAs, Stahlin’s remarks also are heavily infused with a message about readying for an increasingly global business environment. Signs of that trend abound, from the IFRS questions that will begin appearing on the CPA exam beginning in January to the SEC’s consideration of a potential IFRS mandate and the FASB/IASB convergence deadlines.

“We can’t be so parochial now to look only domestically. We’ve got to look worldwide,” he said. At his community bank, smaller businesses are dealing with international issues ranging from letters of credit to decisions about manufacturing plants overseas or in Mexico. “It’s think locally, but act globally.”

Previts applauds that view. He’s been mulling the U.S. CPA profession’s demographics and trends affecting the profession. “We’ve never been this large before,” he said. “The question is how do you sustain and grow a CPA in the 21st century. And I think it’s going to be a global CPA answer.”

To help CPAs develop the necessary skills for competing in that environment, the AICPA houses news, information and resources on the websites ifrs.com and aicpa.org, he noted. And soon the Institute will offer a certificate for CPAs who demonstrate core competency in IFRS. “One thing we do know about international business and reporting is that there will be a demand for the expertise and insight that only CPAs can deliver,” Stahlin said. “We will continue to work to make sure that the CPA remains a premier accounting credential here and around the world.”

In the 1990s, the profession, led by the Institute and state societies, undertook a vision process. The task was to assess where the profession was and develop an outlook for 2011 and beyond.

In 2011, the AICPA is rekindling the Vision process. The work will be similar in nature but more abbreviated than the original project, which encompassed roughly 200 meetings and 3,400 volunteers.

Most days find Stahlin dressed in a crisp white shirt and tie. His only concession to casual day is wearing a blue dress shirt. But he’s not all business. “I have the ability to work hard, but I also have learned to enjoy life,” he said. “That I learned from my family.”

He spends his downtime playing tennis or golf, and spending weekends at his beach house, and time with his wife and four daughters. But when asked about his hobbies, he gives volunteering equal billing with sports and the shore. “I think board participation is something that expands you dramatically. It takes you out of your everyday job and puts you into a place you may be somewhat unfamiliar with. You’re surrounded with other people who are very intelligent. My advice is, whenever you go on a board, you listen at the first couple meetings. You start to interject, and then as time goes on, you try to effectuate change,” he said.

Thomas, the New Jersey CPA society director who has worked closely over the years with Stahlin at the NJSCPA, describes Stahlin as a calm leader who really listens.

Stahlin began honing his leadership skills early on in the Boy Scouts, where he became an Eagle Scout at age 14. As the father of four young children, he had an “aha” moment that prompted him to refine his strategy for selecting nonprofit work. His 5- year-old daughter voiced her contempt for the local board of health, which was consuming his volunteer time several evenings a week. From that point on he decided to invest his volunteer hours in two ways while his kids were growing up—in the CPA profession and in organizations that resonated with his children so that the results of his time away from home would be more tangible for them.

READYING FOR THE FUTURE

The motto of Stahlin’s alma mater, Montclair State University, was carpe diem, Latin for “seize the day.” “Over the years I’ve tried to live that slogan,” he said. “I’ve used that in my dealing with potential opportunities for mergers.” But when he led the university’s foundation board into a 100th anniversary celebration, talk turned to carpe futura—seizing the future. He’s carrying that theme into his term as AICPA chairman.

“Capitalizing on the future is really the thought leadership that we need to provide, not only for our constituencies, for our members, but for our clients, also for members in industry, for employers, for employees, the members in government,” he said. “This is a great profession. It’s one built on integrity; it’s one built on competence; and it’s one that will last for a long time. We’ll have some challenges. But as with this country, we’ll survive and thrive.”

Kim Nilsen is the JofA’s editorial director. To comment on this article or to suggest an idea for another article, contact her at knilsen@aicpa.org or 919-402-4048.