Shortcuts That Don't Clutter the Desktop 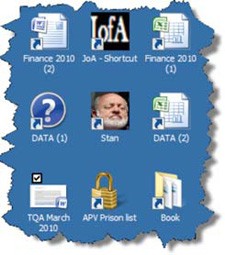 Q: I love those handy icon shortcuts that launch applications and files. In fact, I’m so addicted to them I find it hard to resist adding just one more to my desktop. As a result, I end up with so much on the desktop that my shortcuts get lost in the clutter. Please help me get out from under.

A: I share your addiction to shortcuts. Fortunately, Windows XP, Vista and Windows 7 offer neat alternatives that may ease your problem. You can, of course, slide shortcuts that launch either files or applications into the Start button and they will line up, like a totem pole, one above the other (see screenshot below). But that, too, fills up quickly.

My favorite for opening an application trumps even the shortcut icon on the desktop or in the Start menu because it sidesteps the mouse and uses the keyboard instead—in effect, it’s an “invisible” shortcut that takes up no real estate. 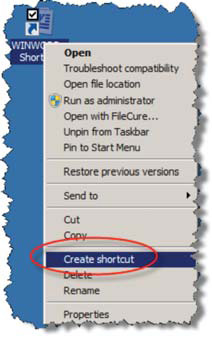 The steps to create a keyboard shortcut are essentially the same for all versions of Office. The easiest way to create one, say, for Word, is first to create a desktop icon shortcut for it. To create the Word shortcut, open Windows Explorer and locate WINWORD.EXE by going to Program Files, Microsoft Office, Office 12 (in Office 2007) or Office 11 (in Office 2003). Right-click on it and then on Create shortcut (see screenshot at right).

Now that we’ve created a desktop shortcut, right-click on it and then on Properties to open the file’s Shortcut Properties screen (see screenshot below).

Be sure the Shortcut tab is selected. Place your cursor in the space next to Shortcut key:. Notice that Ctrl+Alt keeps appearing in the space: That’s because it defaults to Ctrl+Alt as part of your shortcut key, but you can choose other unused key combinations. 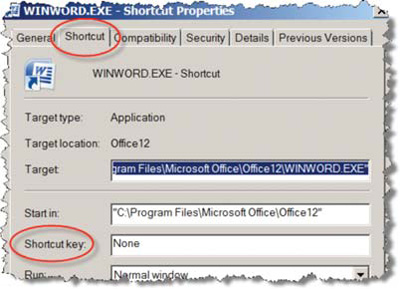 In this case, I’ve chosen to add the letter W (for Word) after Ctrl+Alt, and the shortcut key becomes Ctrl+Alt+W. Click on OK and the keyboard shortcut is set.

Now, to get the icon off your desktop, just drag it into a catchall folder. Note that if the shortcut fails to launch after you’ve moved it into the folder, try deleting it and re-creating it, but without assigning shortcut keys. Next, move the icon into the folder, then create the keyboard shortcut.

Now that we’ve dealt with applications, let’s clear up the clutter of too many desktop shortcuts for Office files. Here is where Windows 7’s handling of the Office 2007 Pinned and Unpinned tools has a major advantage over XP. Microsoft took the former Recent Documents and Favorites tools and redesigned them into a much handier shortcut tool that can be engaged two ways.

One way is to click on the Office button of any Office 2007 file (see screenshot below), which displays not only Recent Documents, but also those files you assigned as shortcuts (files with embedded thumbtacks). Left-clicking on a thumbtack toggles the file from Pinned (shortcut state) to Unpinned (to just a Recent Document state). 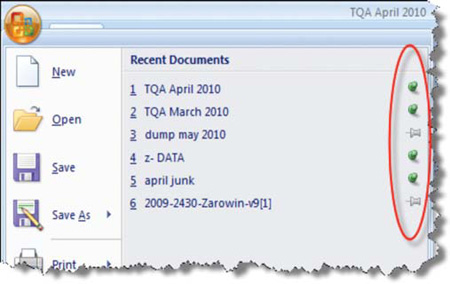 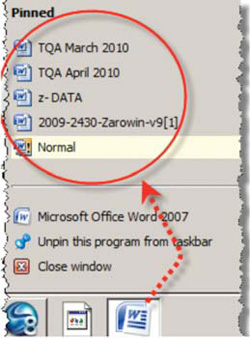 Now we come to the part of the tool that can effectively clear all those shortcut Office file icons from your desktop—not only without losing a single one, but also giving you the opportunity to add nearly as many as you wish while keeping them in order—that is, files associated with an application stay lined up under the icon for that application.

So if you place the Word application icon into the taskbar (by dragging it there), you then have the option of pinning any Word file to it so that, when you right-click on the app’s icon in the taskbar, all the Pinned files are displayed (see screenshot at right). A subsequent single-click on any of them will open that file. A left-click on the app’s icon will open a new (blank) file of that application.

So now you can shortcut without guilt.