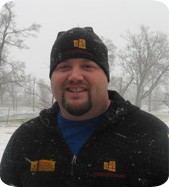 I seem to have a knack for managing chaos. It’s a good thing, otherwise, I don’t think I could have succeeded as a volunteer coordinator for Extreme Makeover: Home Edition.

My first experience in this role (I’ve done it three times!) was in 2006. The television show approached my company, which is Oklahoma’s largest homebuilder, to be the primary contractor to build and furnish a house in four days for a family who became homeless after the father—a pastor—unexpectedly died. When the construction team asked me to coordinate the volunteers, I said “yes,” even though it was January, and I had to close out the year.

My job, I discovered, was to coordinate everything that affected the hundreds of volunteers on the project, starting with recruitment and ending with site cleanup. Of course, I also had to figure out what each of the volunteers would do and to take care of them while they were on the job site—feed them, get them T-shirts and hard hats, and make sure there were enough portable toilets.

I called on skills I learned since I got into public accounting in 1996. Over the years I had worked with a number of companies with various problems. I treated their problems like a puzzle whose pieces had to fit with solutions. I used the same approach when I went to work at Simmons Homes.

The company was using an antiquated software program that required four days to close out jobs each month. We decided to convert to a much more efficient accounting software package. To make the software work, though, we had to examine and redo every process—a highly complex undertaking. I thought that was the ultimate in managing chaos—until the Extreme Makeover projects.

As soon as I had an idea of what I was getting into as a Makeover volunteer coordinator, I sat down with outside information technology experts who designed a Web site and a database that would schedule volunteers, assign tentative jobs to them, and automatically send them confirmation of their assignments.

My second stint as volunteer coordinator came two years later in New Orleans. The show asked a number of builders to come back and work on simultaneous projects. Ours was a church that had been totally destroyed by Hurricane Katrina. My biggest challenge on that project was finding enough volunteers to make the project a “go.”

They say the third time’s a charm. Could be. In January 2010, we were again asked to do a makeover. This time we got smarter, thanks to advances in technology. We used Facebook and Twitter in addition to our Web site and e-mail. Facebook was great. We had more than 2,600 fans who not only kept in communication with us, but also posted their own personal stories and photos. They built a real community.

I thought my previous Extreme Makeover experiences would get me through this third time unscathed, but I didn’t count on a 7-inch snowstorm. The higher-ups decided to push everything back a day, so I had to notify all of the volunteers of the scheduling change. About two hours after we sent out e-mails to everyone, the show’s management changed their minds. Talk about chaos—trying to undo our previous communication!

Doing Extreme Makeover was an enriching experience. Professionally, it helped us see where we could improve our business. After all, if volunteers could build an entire house in 96 hours, we could surely cut down on the 110 days it takes for a normal build, and we did.

Personally, it felt really good when the neighbors thanked us for helping the Makeover families. I think, though, the best experience was when a 75-year-old woman expressed her gratitude for the church we built in New Orleans. She said she would no longer have to walk two miles through gang-infested neighborhoods to worship.

Would I do it again? I lost a critical month’s work of accounting time with each experience, but thanks to some overtime and a great staff who picked up my slack, everything got done. I also lost sleep, forgot to eat, and worried things would go wrong. But what I gained from the experience is something I wouldn’t trade for anything. Yes, I would do it again.

—As told to Linda Segall (linda@segallenterprises.com),