CPA Exam to Undergo an Evolution 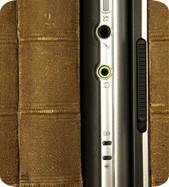 The CPA exam is undergoing its largest overhaul since moving from paper and pencil to computers. Jan. 1, 2011, will mark the launch of what people behind the exam are calling CBT-e (Computer-Based Testing evolution).

While news of these changes is obviously important for those who plan to take the exam, accounting professors and CPAs who employ future CPAs will also need to be familiar with the new format in order to mentor candidates to increase their likelihood of passing.

The exam is offered jointly by three organizations: the National Association of State Boards of Accountancy (NASBA), the AICPA and Prometric. The AICPA is responsible for developing and scoring the exam, NASBA for the National Candidate Database, and Prometric, a wholly owned subsidiary of ETS, for examination delivery at authorized test centers. The three signed an amended agreement in March that extends the agreement to 2024.

THE NEED FOR CHANGE

The nature of the work CPAs do and the way people learn are changing, and old ways of delivering instruction or tests are not as well suited to the way people work today, which is why new technologies are necessary, according to Craig Mills, AICPA vice president–Examinations. Mills, who joined the AICPA in 1998, was responsible for moving the CPA exam to the computer- based format.

“You couldn’t realistically test people on their research skills with the paper test,” Mills said. “Imagine the logistics of trying to ensure that every candidate had copies of the authoritative literature available when they took it. With literally hundreds of candidates in some locations (including state fairgrounds), it would have been a nightmare to try to manage those documents. The move to the computerized exam was to give us a platform for innovation.”

Mills reassured test takers that, while the latest changes are substantial, they are not as big a change as the move from paper to computers, and there will be plenty of advance notice.

He summarized some changes in store with this new iteration:

New Content and Skill Specification Outlines (CSOs/SSOs) will take effect, and the exam will introduce new question formats and a new release of authoritative literature—the FASB Accounting Standards Codification. Other changes include a new section structure, section time allocations and weighted value of each component (see Exhibit 1). Scoring will place more emphasis on skills, and a new calculator and improved spreadsheets are being developed. 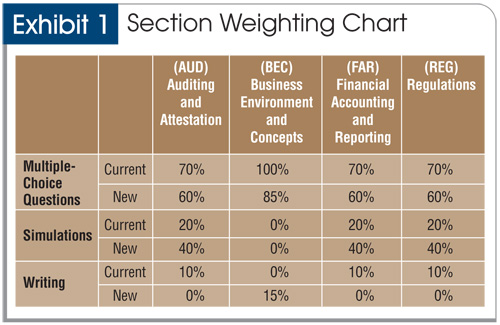 For Auditing and Attestation (AUD), Financial Accounting and Reporting (FAR) and Regulations (REG), three groups of 25 to 30 multiple-choice questions will remain.

The Business Environment and Concepts (BEC) section also will continue to contain three sets of multiple-choice questions. It will not include simulations, but will add three written communication tasks on BEC topics that will be weighted at a total of 15%.

Currently, multiple-choice questions account for 100% of the BEC score.

The changes to simulations and writing are apparent in every section and reflect what Mills says is an increased confidence in the simulations.

“When we first introduced simulations, we weren’t certain how difficult they would be for candidates and how they would compare to multiple-choice questions in terms of difficulty and other statistical properties,” he said. “We now have almost six years of experience and over a million test administrations worth of data showing that simulations have as good quality as multiple-choice questions and that they measure different skills.”

In addition to the current research tasks that require candidates to locate information in the authoritative literature, the new format will, over time, allow the development of new kinds of simulations.

Some of the possible future tasks include:

Candidates are currently often frustrated by how long they have to wait for their results and the unpredictability of when those scores will arrive, Mills acknowledged. Due to quality control and statistical requirements for the current simulations, some candidates have to wait eight to 10 weeks to receive their scores while others receive them within a few weeks. Under CBT-e, quality control and statistical processes will occur before task-based simulations are administered operationally, as is done today for multiple-choice questions (some are unscored for analysis purposes). Over time, this will allow score reporting to be both faster and predictable, Mills said.

The goal is for candidates to get results about two to four weeks after taking the exam, he said.

“That will be a huge improvement in customer service,” Mills said.

IFRS will make its way onto the exam for the first time in 2011. This addition was based on research that found an increasing number of entry-level CPAs need to be familiar with IFRS for a variety of reasons, including preparing financial reports for companies in the U.S. that are owned by foreign IFRS entities; working for U.S. companies that own foreign entities reporting in IFRS and needing to convert IFRS financials into U.S. GAAP; and auditing companies or subsidiaries that report in IFRS.

Entry-level CPAs will need to be able to work under both U.S. GAAP and IFRS, so the exam will likely include both standards for some time, Mills said. Initially, the IFRS questions will be a small portion of the exam and will expand. Questions on international standards, not just IFRS, will appear in three sections—AUD, BEC and FAR—over time. (Test your knowledge on 10 sample IFRS-related exam questions.)

Over the past several years, the AICPA and NASBA have considered offering the CPA exam internationally. They hope to do so in a few countries on a pilot basis in 2011. Candidates would continue to apply through state boards and would have to complete the full process of attaining the CPA license, according to Mills.

About 10% of current test takers travel to the U.S. or one of its territories for the exam. Offering the exam internationally would make it less expensive and more convenient for these candidates, Mills said. The exam would likely cost test takers more money to take abroad, but less than the cost of traveling to the U.S., he added.