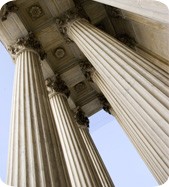 The museum is growing its virtual collection monthly at a time when the worst financial upheaval since the Great Depression has added relevance to the history of financial regulation and the pivotal events that helped shape securities law.

“Where are we going if we don’t know where we’ve been?” asked Deloitte & Touche USA Deputy CEO Robert Kueppers, a society co-founder. At the first planning meeting in 1999, he joined former SEC chairmen Harvey Pitt and David Ruder and attorney Paul Gonson to plot the preservation of regulatory history. With the dot-com bubble already inflating and Enron lurking a few years away—events that would vault securities regulation to prominence in American households—the founders were ahead of the curve.

At first, the founders weighed the merits of a brick-and-mortar museum. Faced with all the tasks and costs that go with securing and maintaining real estate, founding Executive Director Carla Rosati created and opened the purely virtual museum and archive in 2002.

“The notion that you had to get on an airplane or train to look at documents in Washington didn’t seem to make a whole lot of sense in modern times,” Kueppers said.

The museum and archive has no physical repository. It digitizes borrowed text and images, then returns them to their owners. Every item on view lists its provenance so that visitors who want to can locate originals.

Physical space is not an issue, but the virtual museum places its own limits on the size of its collection. “We don’t want anything available elsewhere online,” said Rosati. The collection excludes, for instance, speeches that the SEC or other regulatory agencies post online.

In 2009, the virtual museum drew more than 100,000 visitors from the ranks of finance professionals, scholars, investors and others. Visitors can find unmatched documentary evidence of forces that spawned securities regulation. A case in point, said Kueppers, is the 1940 McKesson & Robbins Report that dissected the securities scandal of its day, perpetrated by swindler Philip Musica. “It’s a great example of seminal thinking about a case that involved inventory fraud,” said Kueppers. “It helped shape some of the standards still in place today for audits of public companies.” Until the virtual museum made the findings and conclusions in their entirety available in digital form, the out-of-print McKesson & Robbins Report languished out of sight from the general public.

For a window on the private thoughts of regulatory framers, annotated drafts of original securities laws bear personal notations by James Landis, an architect of the 1933 and 1934 securities acts. Over a long weekend in a Washington hotel, said Kueppers, Landis and two colleagues crafted the laws that created modern markets and the SEC itself. Later, Landis became the second SEC chairman, succeeding Joseph Kennedy.

The interactive timeline charts the progress of market regulation by decade since the 1930s in the context of national and global, but unrelated, events. In 1970, for instance, the Securities Investor Protection Act and the advent of RICO laws aimed at organized crime accompanied the U.S. invasion of Cambodia and shootings of anti-war protesters on the campus of Kent State University.

Galleries house recent interviews and “fireside chats” with market experts, politicians and others. All of the programs and a majority of the oral histories in the museum were created by the society. A 2003 video broadcast with then-New York Attorney General Eliot Spitzer focuses on securities enforcement issues that brought him to fame and the New York governorship. It’s available in MP3 and edited transcript.

Or read doubts expressed in 2009 by Nobel laureate Joseph Stiglitz on the value of a single financial regulatory agency as an economic bulwark in times of crisis. A unified regulator in the U.K., Stiglitz warned, did not forestall that country’s financial crisis. Chats and interviews also debate the scope of professional judgment, cross-border regulation and Sarbanes-Oxley legislation, to name just three current topics.

Visitors can return to the past in actual news footage, including three broadcast press conferences after the 1987 stock market crash. A news clip displays a cautionary tale for Wall Street’s high and mighty: a repentant New York Stock Exchange President Richard Whitney, who was found guilty of embezzlement in 1938, in handcuffs on his way to Sing Sing prison, where he served three years for defrauding customers of his investment firm.

A new section of the museum dedicated to film, radio and television documentaries will be launched later this year.

Finance professionals who peruse the history of market regulation can burnish their skills. A forensic accountant who types that specialty into the site’s search bar will find a list of links, such as a “fireside chat” in 2004 with outgoing society President James Barratt and hosted by Georgetown University law professor Donald Langevoort that combined an introduction to forensic accounting with guidance on litigation.

THE HISTORY OF NOW

The museum’s supporters are mindful of the place current events will have in the collection. “We’re living history today,” said SEC Historical Society President Sue Coffey, who is senior vice president–Member Quality & International Affairs for the AICPA. “We will have to figure out at what point to record the history of now.”

Kueppers concurred. “I’m always worried about assuming too much about the present,” he said, “because often the implications won’t be known for years to come.” A conversation with former society trustee and current SEC Chairman Mary Schapiro, for instance, might serve history better by waiting until she completes her term.

Coffey said her top priority is securing the museum’s future, and that takes money. Funding comes strictly from private sources rather than from the SEC or other federal sources. The society stands on a sound financial footing—it has raised $6.4 million since its founding in 1999. In 2009, $765,000 in donations safely exceeded expenses of $666,000, and the museum rests on $1.4 million in assets.

Private support puts a premium on fundraising but also gives the museum a free hand to decide its character. “We take no sides,” said Rosati, “so that people in 20 to 50 years can say this is how it was.”

S.L. Mintz (slmintz@mac.com) is a freelance writer based in Montclair, N.J.

To comment on this article or to suggest an idea for another article, contact Kim Nilsen, editorial director, at knilsen@aicpa.org or 919-402-4048. 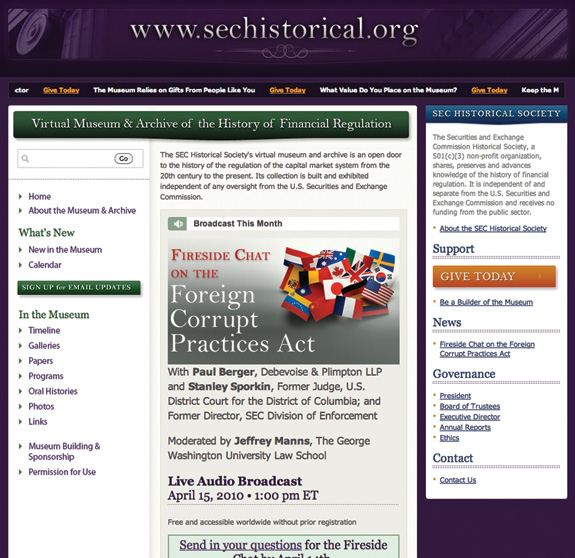