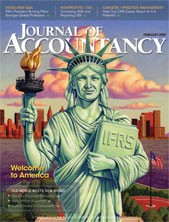 The Journal of Accountancy won an honorable mention for Cover Illustration in the Editorial & Design Awards competition sponsored by Media Industry Newsletter.

The commissioned illustration of the Statue of Liberty, by Jason Edminston of Three in a Box Inc., appeared on the February 2009 cover, which featured an IFRS theme and the headline, “Welcome to America.” In the image, instead of a tablet with the date of the Declaration of Independence, Lady Liberty holds a book inscribed with “IFRS.”

The awards program recognizes excellence in content and design among consumer, business-to-business and specialized information media brands. Winners were selected from a pool of entries by an outside panel of publishing experts as well as by the sponsoring organization’s editors. Tech Web’s InformationWeek won the category with its “You vs. the Downturn” cover, which featured a full-color “you” as a business person emerging from a black-and-white photo background.