What's In A Name? The Key To Following Directions

WHAT’S IN A NAME? THE KEY TO FOLLOWING DIRECTIONS

When I read computer instructions, I sometimes get confused because I don’t know what the technical names refer to—for example, all the parts of the desktop screen, such as taskbar and system tray.

That’s true, you can’t tell the players without a program. I wonder, for example, how many readers can even identify the monitor’s desktop, which is often referred to in instructions. Answer: It’s the screen that appears after a computer is fully started up but before any applications are launched, or, if they are launched, they are minimized. I use my desktop (see screenshot below) to store shortcuts to applications and frequently used files. That gives me quick and easy access to them. Also, notice on the right, I run a Google application that tracks current news and local weather and includes a box in which I can add brief text reminders to myself. You can find that handy application, and many others, at www.google.com/a/. 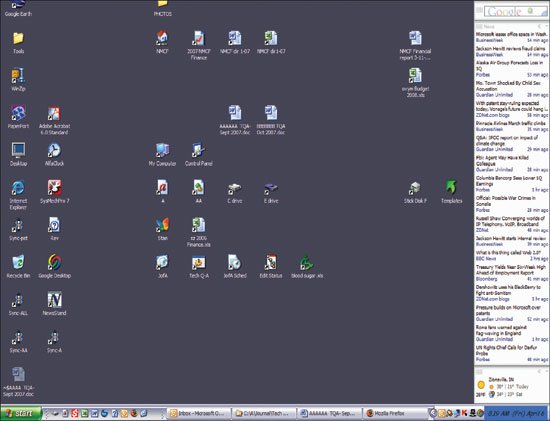 But back to your question. Both the taskbar and the system tray are traditionally at the bottom of the Windows screen—extending from Start all the way to the clock on the extreme right. It can, however, be moved (simply by dragging with your mouse) to other locations—such as either against the right, left or top edge of the screen.

The taskbar comprises just a portion of that real estate—extending from Start and including the icons you have chosen to include in QuickLaunch (if you use it) and any open applications and files. In the screenshot below of my QuickLaunch , I show all my frequently used applications (and a few shortcuts I want to be able to access no matter what’s on my screen) and one open file (it’s for this article) and my Outlook application.

The system tray (also called the notification area) includes the clock and icons that represent all the system applications, such as speaker controls and antivirus software (see screenshot below). Most of the icons are hidden behind the left-facing arrow.

If you click on that arrow, all those hidden icons suddenly slide into view (see screenshot below); but after a second or two, they return to hiding under the arrow. If you hover your cursor over any of the icons, its function will be described in a small text window. Windows also uses this space to display yellow balloons that pop up to alert you to the existence of program fixes or other information (see screenshot below).