Out, Out and Stay Out, Reviewing Toolbar

What is it about Excel’s Reviewing toolbar? It seems to have a mind of its own. It turns up intermittently—usually when I don’t want it—and each time I have to go to the toolbar menu and unclick it. Is there some way to stop it?

I don’t know if it’s a bug or if the Microsoft team just believes it’s a handy function to have around all the time. If it helps any, you’re not alone with the problem. I became so irritated by it that I recorded a simple macro with a shortcut key to remove it every time it pops up. If you’d like to do the same without any special macro knowledge, here’s how.

The next time it appears, click on Tools , Macro and Record New Macro , which brings up the Record Macro screen (see screenshot). Give the macro a name (it has to be one word) and a shortcut key and click on OK . 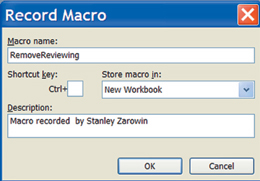 Then, each time the Reviewing toolbar appears press your shortcut key and, poof! it will disappear.