Should You Leave Your Computer Running 24/7?

Should you turn off your computer at day’s end? This question is being hotly debated in my office. The split seems to be between those who drive gas guzzlers and those with economy cars.

You are raising a much bigger issue than energy conservation. You surely save electricity by turning off your computer at night even though you “waste” a bit when you launch it in the morning because computers draw an extra surge of electricity each time they start up. The savings balances out to about $100 a year. The downside to repeatedly turning it off is the extra strain on the electronics—though I’m not aware that the cost of that strain, measured by an earlier breakdown, has ever been quantified. In any case, computers become obsolete these days before they fail.

The best reason for turning off a computer at night is that it clears its temporary memory (not the hard disk); as a result, it will run somewhat faster when you fire it up again.

The conservationists in your office have two other energy-saving options: Standby and Hibernate . Standby runs the computer on low power and blanks the monitor; when you want to resume, it starts up instantly. Hibernate is just a small step before a complete shutdown. Before it goes into hibernation, it saves all open files to the hard drive and remembers the last configuration, so when you start up again, everything that was running is fully restored.

To get to Hibernate , click on Start and you’ll see this screen: 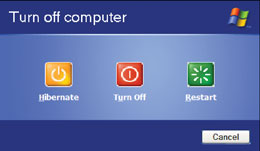 To adjust when you want an inactive computer to automatically go into either Hibernate or Standby , open the Power Options Properties screen by clicking on Start , Control Panel , Power Options . Once you make your adjustments, you can save the settings under Power Schemes (see screenshot below). 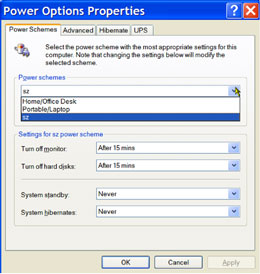 As you can see from the above screen, which shows my settings, I save electricity by setting my computer to turn off its monitor and hard disk after 15 minutes of inactivity. However, because I find it annoying, I don’t use automatic Hibernation or Standby after a certain period of time. But if I know I’ll be away for more than a day, I usually turn it off.