Susan Coffey and Arleen Thomas, the first women to be promoted to senior vice-president at the AICPA, both make use of flexible work arrangements (FWA). With two young children each, Coffey and Thomas have used the AICPA’s telecommuting program and work two days a week from their home offices.

Using FWA saves Coffey about two-and-a-half hours and Thomas about one hour of commuting time each day—time they can spend on AICPA work or family activities. Each uses a combination of nanny, baby-sitters and alternative sources to care for her children. Coffey’s parents and extended family look after her children, ages seven and eight, after school and when she and her husband have to work late or travel. Thomas turns to the Working Women of Bronxville Network, a group of working mothers who help each other when regular baby-sitting agreements don’t work out.

Coffey is vice-president of member quality & state regulation, a group that has 50 people and covers professional ethics, peer review, audit quality centers and state regulation and legislation. She joined the AICPA 15 years ago as a technical manager in the independence and behavior enforcement area and was promoted to vice-president in 1998, and then to senior vice-president in 2005. Before joining the AICPA, she worked for Coopers & Lybrand and the Berlitz School of Languages.

Thomas was promoted to senior vice-president in 2005, heading the member competency and development group whose 243 people are responsible for developing professional standards and member guidance and organizing the CPA exams, conferences and training programs. Thomas joined the AICPA in 1992 as a director in accounting standards and AcSEC support. She was promoted to vice-president of self-regulation, peer review and professional ethics in 1995, and became vice-president of her current group in 1998. Before joining the AICPA, she worked for KPMG in the audit practice for nine years.

Coffey says the FWA program helps her manage her time and focus on work. With a separate office area set up at home and telecommunications access to in-office facilities, she says she is more productive working at home and also has achieved a work/life balance that allows her to work in the school library and attend school events.

Thomas coordinates with her husband on work and travel schedules. One leaves for work early and comes home early, the other the reverse; when one travels, the other doesn’t. She has dinner with her three- and five-year-olds every day and plays with them until 8:30 p.m., when she goes to her home office to work again. Thomas says she is fortunate never to have missed a school event.

Still, FWA has its challenges. It requires organizational skills and discipline to run a home office. When the children are around, Thomas puts a yellow sign on her office door, and they understand that it means: “Do not interrupt. Mom needs some quiet time.”

Barry Melancon, president and CEO of the AICPA, believes in retaining talented people and helping them achieve work/life balance. His belief is: Balance everything so you can be good at anything. The AICPA measures success on output, not input, and FWA fits in with this philosophy. 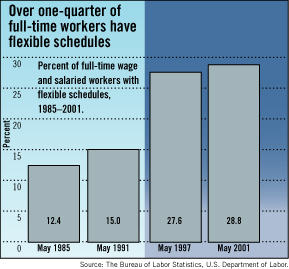