The AICPA presented a 2004 Special Recognition Award to Robert S. Roussey, CPA, professor of accounting at the Elaine and Kenneth Leventhal School of Accounting at the University of Southern California (USC), where he has taught since 1992. The award recognized Rousseys extensive contributions in the area of international auditing standards. He served five years as chair of the International Auditing Practices Committeethe predecessor to the current International Auditing and Assurance Standards Boardof the International Federation of Accountants.

Roussey is a member of the AICPA International Issues Committee and has served on the Institutes Auditing Standards Board. He also was international president of both the IT Governance Institute and the Information Systems Audit and Control Association and is now a member of both organizations boards of directors. He was a member of the Institute of Internal Auditors board of advisers and practice vice-chair of the American Accounting Associations auditing section. Before his tenure at USC, he was a partner at Arthur Andersen and a faculty member of the Kellogg Graduate School of Management at Northwestern University. 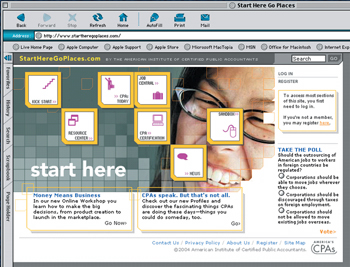 AICPA Marketing Effort Wins Prizes
Catch Me If You Can, the forensic accounting contest and promotion conceived as part of the AICPAs five-year Start Here. Go Places recruitment campaign, won two Marketing Agencies Association Worldwide Globe Awards for creativity, originality, execution and results. The Institutes program excelled among the more than 330 campaigns of 2004, ranking first in the use of direct marketing and second in interactive media achievement.

The campaign featured an online game designed to change students perceptions of the profession and portray it as an attractive career opportunity. It gave high school juniors and seniors an opportunity to play-act and try solving several intriguing financial crimes. Approximately 32,000 students played the game, nearly 14,000 registered at the promotions Web site ( www.startheregoplaces.com ) and more than 6,000 requested information about an accounting career.