Q. I’ve heard that the two latest versions of Word (XP) store the editorial changes and comments of Track Changes (the Word tool that allows various people to pose questions and make suggested changes to a document) and that, if you send the document to someone, he or she can read those comments and changes. If that’s true, it’s pretty scary.

A. It is true, and yes, it is scary. Recently a major public company was embarrassed when someone was able to uncover the tracked changes in one of its financial press releases. It revealed that, to make its negative news more palatable, the original document had been revised before it was released.

The good news is that, after you’ve finished editing a document and you’re ready to distribute it, there are things you can do to eliminate all traces of the tracked changes. (For more on Track Changes , see “ Collaboration Without Headaches, ” JofA , Mar.03, page 71).

The first thing to do after employing Track Changes —and making whatever editorial adjustments you want to make—is to turn it off. As obvious as that sounds, the reality is most people forget to do it because the tool sits quietly in the background and the only way to know it’s still functioning is either to make an editorial change and see the colored type appear or to call up the Toolbar menu and see the check mark next to the Reviewing icon. A shortcut to get rid of the check mark: Click inside an unoccupied place on the toolbar and uncheck Reviewing .

To eliminate all stored track changes in a document, open the Reviewing function. In Word 2002 and 2003, you can alternatively click on View and Markup . From that point you can look at each change and decide whether to accept or reject it individually. If you want to accept all the changes that have been made, on the Reviewing toolbar click on the down arrow next to the “check” icon and pick Accept All Changes in Document. To reject all of them, click on the down arrow next to the X icon and choose Reject All Changes in Document .

Blessedly, Microsoft has a memory aid for such forgetfulness: You can set it to warn you when you save a document that contains tracked changes or comments. To enable this feature, click on Tools , Options and Security and check the box marked Warn before printing, saving or sending a file that contains tracked changes or comments . Forewarned is forearmed. 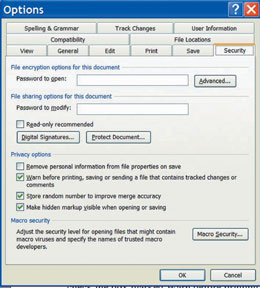