Q. Sometimes I collaborate with several of my partners on a technical memorandum. In order to track the various versions, I’ve tried using Track Changes ( Tools, Track Changes ) and Reviewing ( View, Toolbars, Reviewing ) to assemble each person’s changes to the text, and frankly I don’t like it. It’s way too complicated for me. Is there some other, easier way to accomplish the same task?

A. Admittedly, the Track Changes feature does take a bit of getting used to. If you want a simpler, less automated way to do it, consider using Word’s Versions . With this technique each person saves the memo with the same name—only as a different version.

When ready to save his or her copy of the memo, each user needs to click on File and then Version to bring up the Versions screen. After clicking on Save Now , each will have an opportunity to add a comment about his or her saved version of the memo under Comments on version . When done, each clicks on OK . 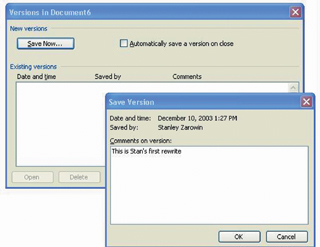 To open a version, each user loads the document being worked on and chooses File, Versions and then double-clicks on the one he or she wants to open.